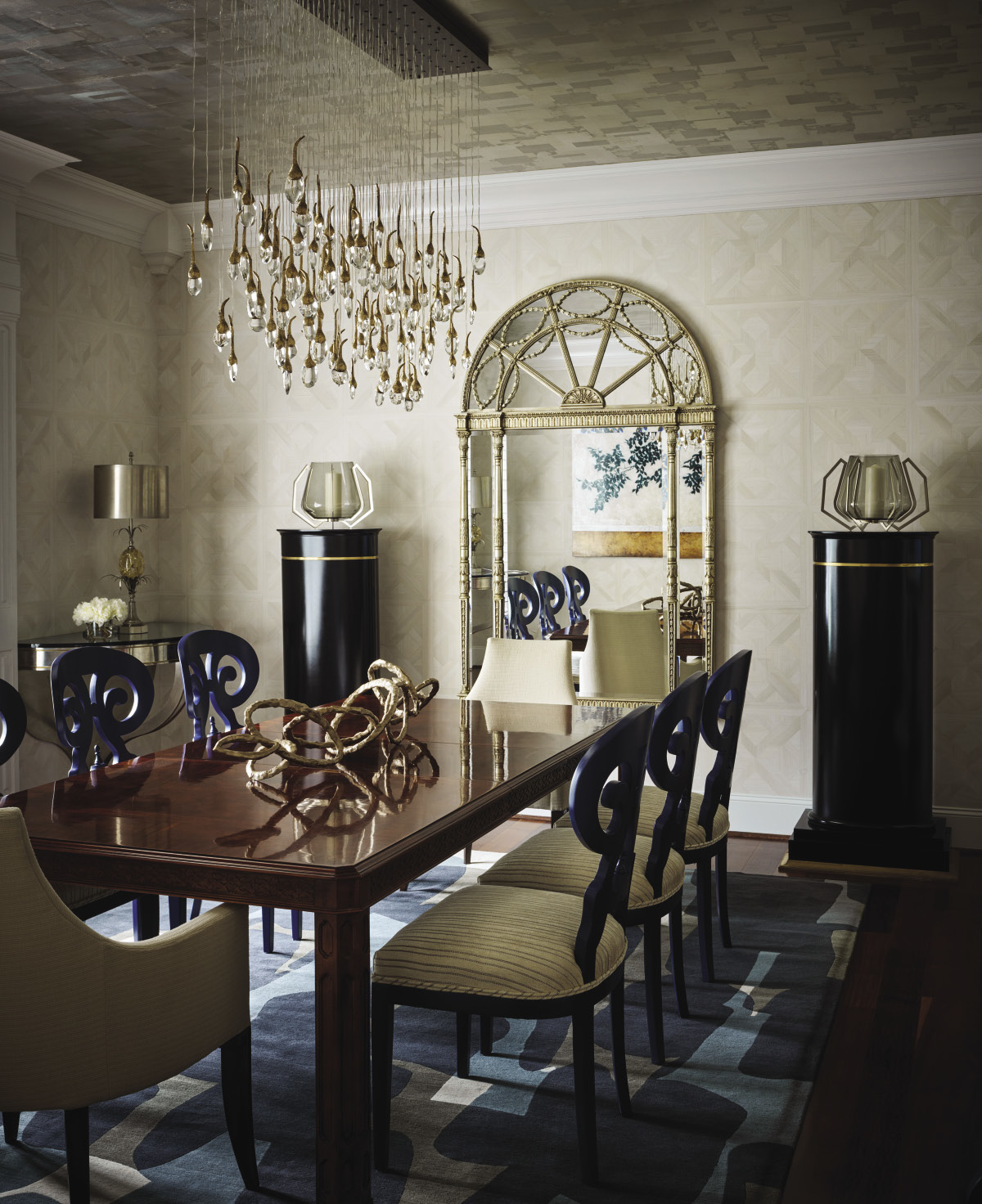 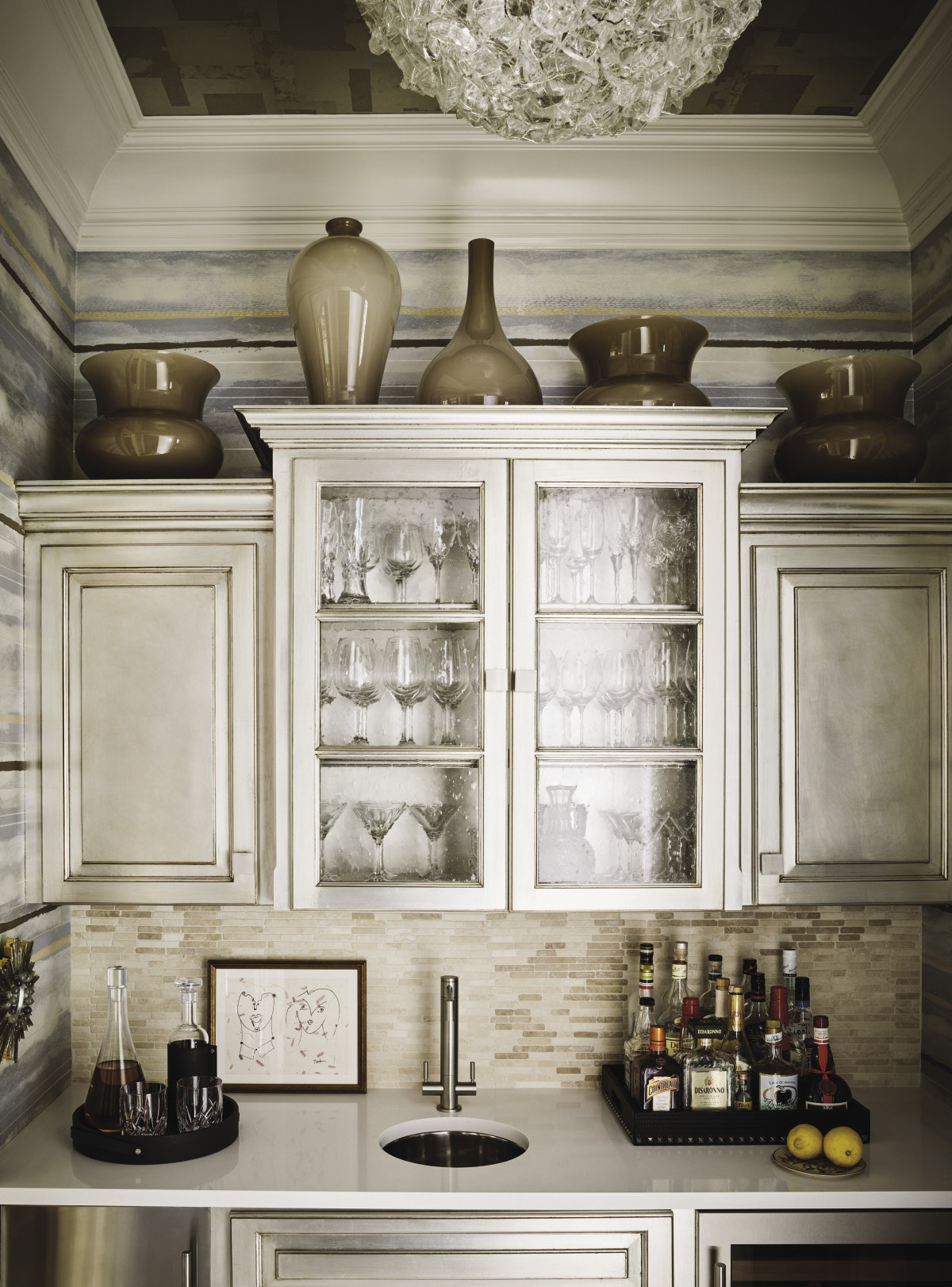 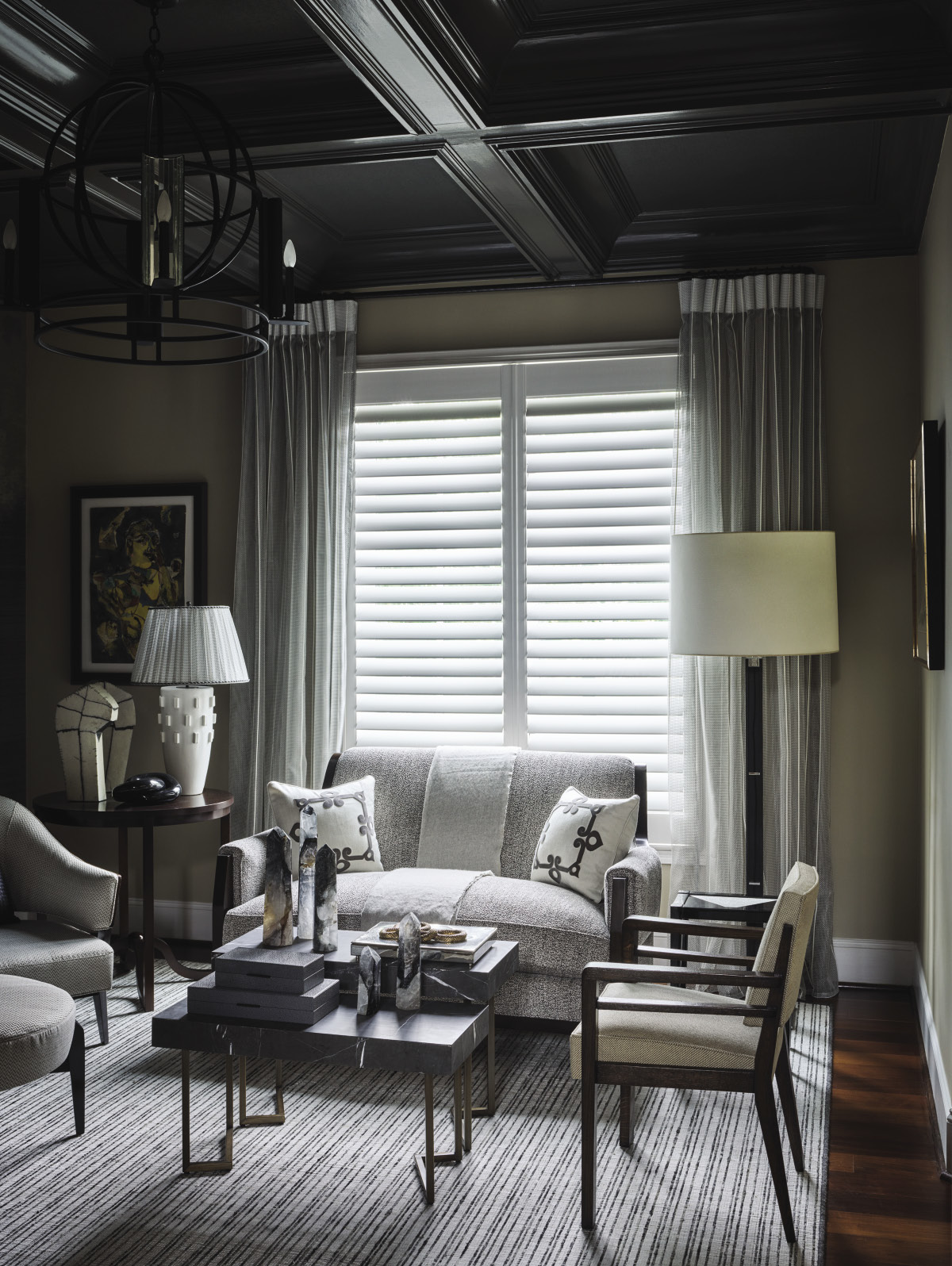 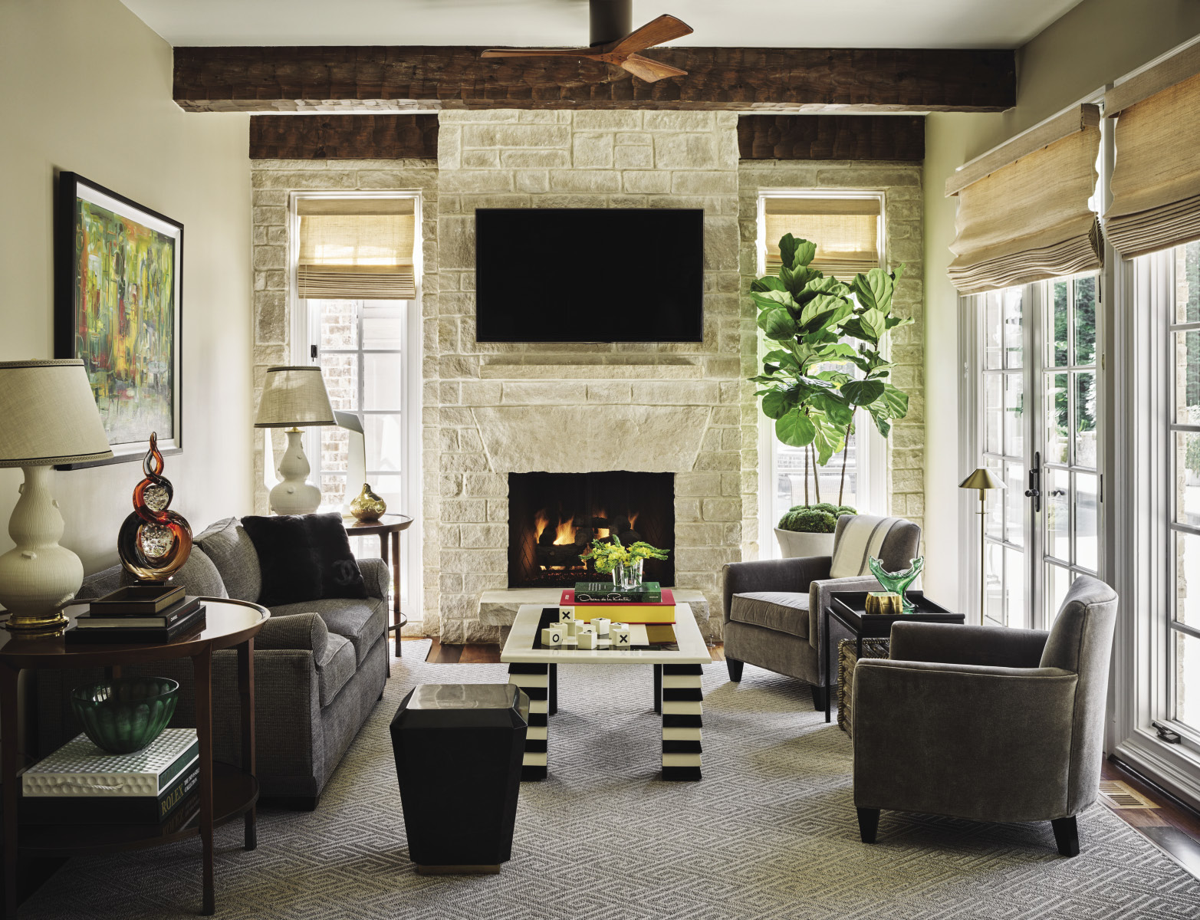 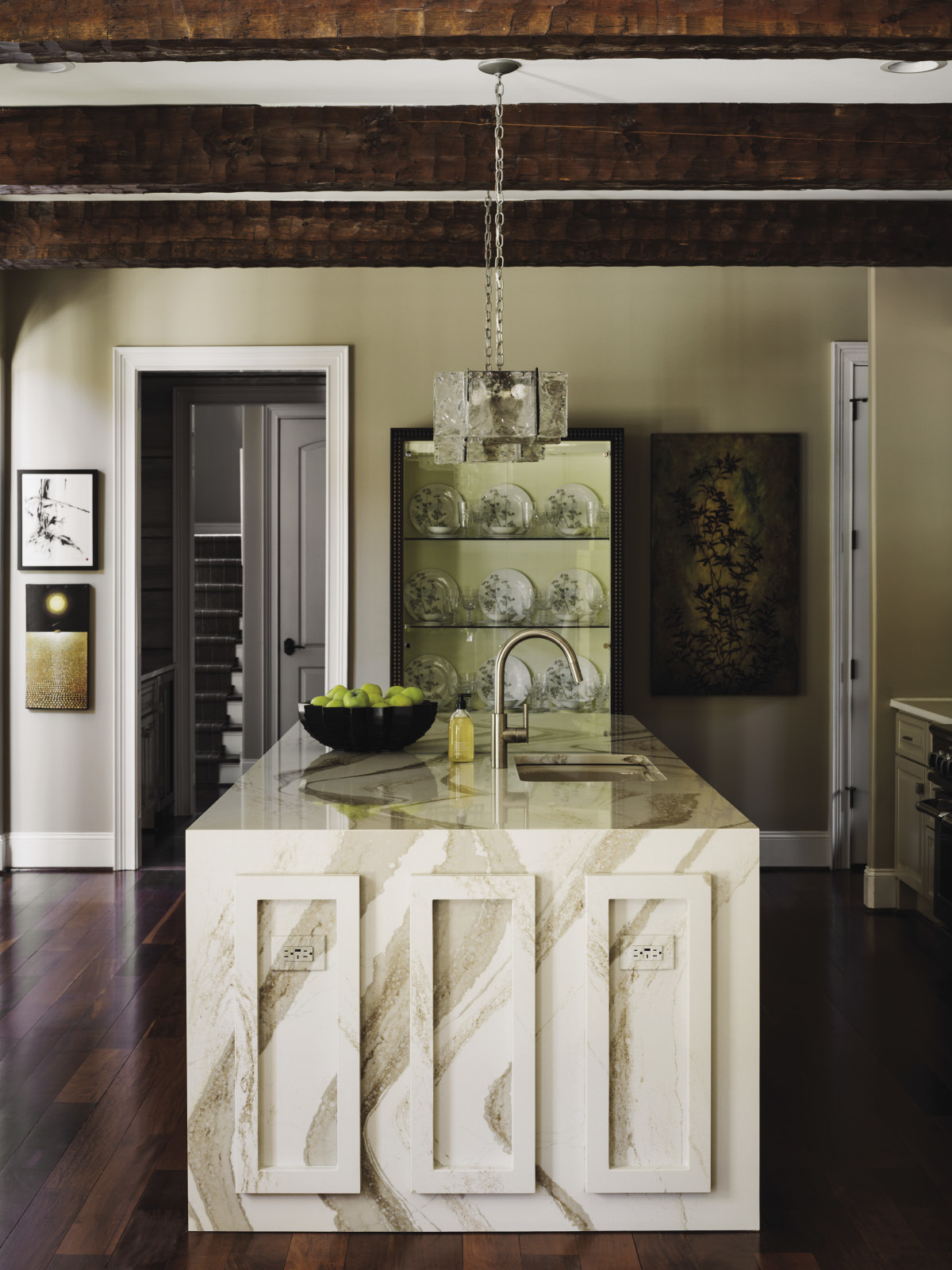 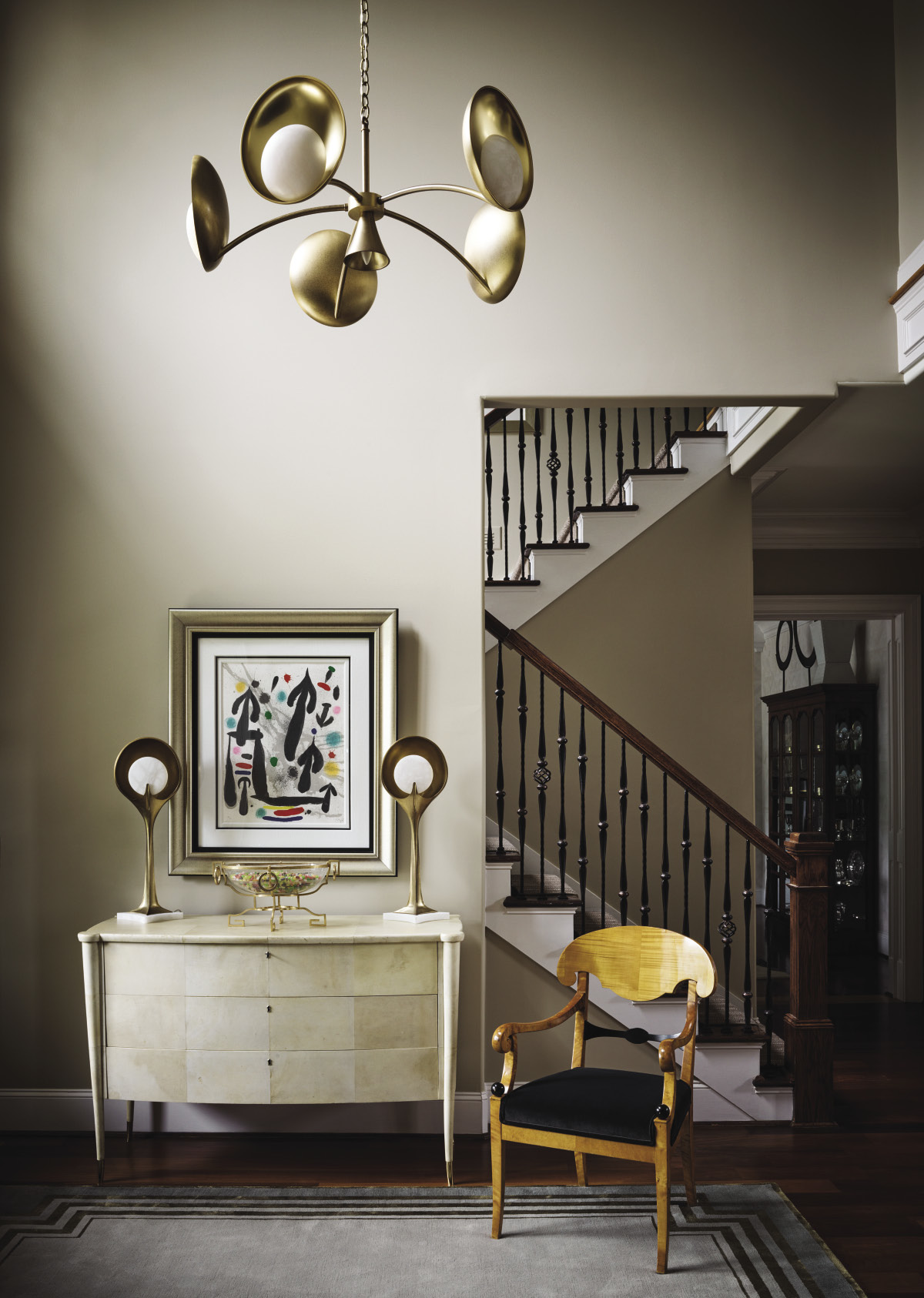 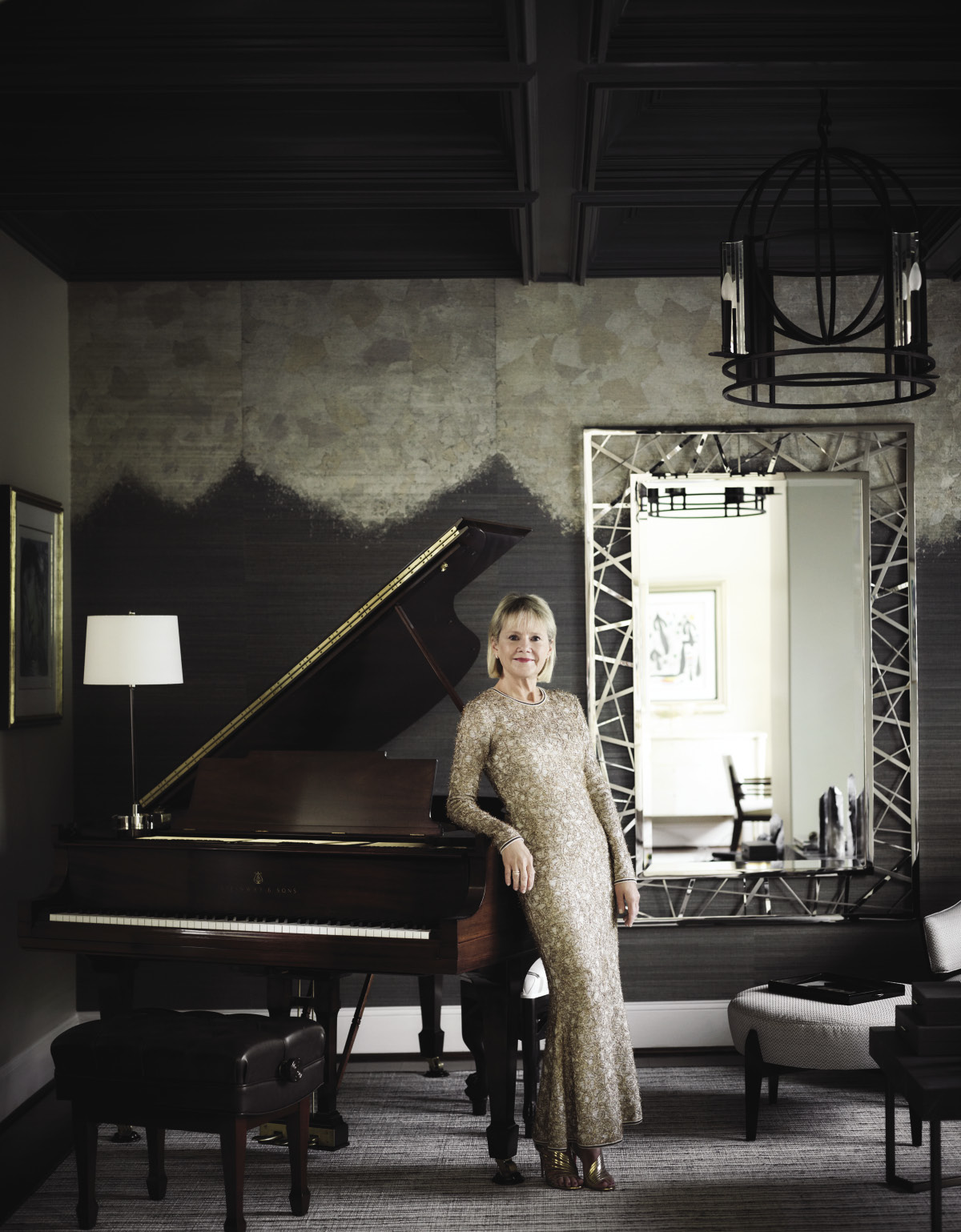 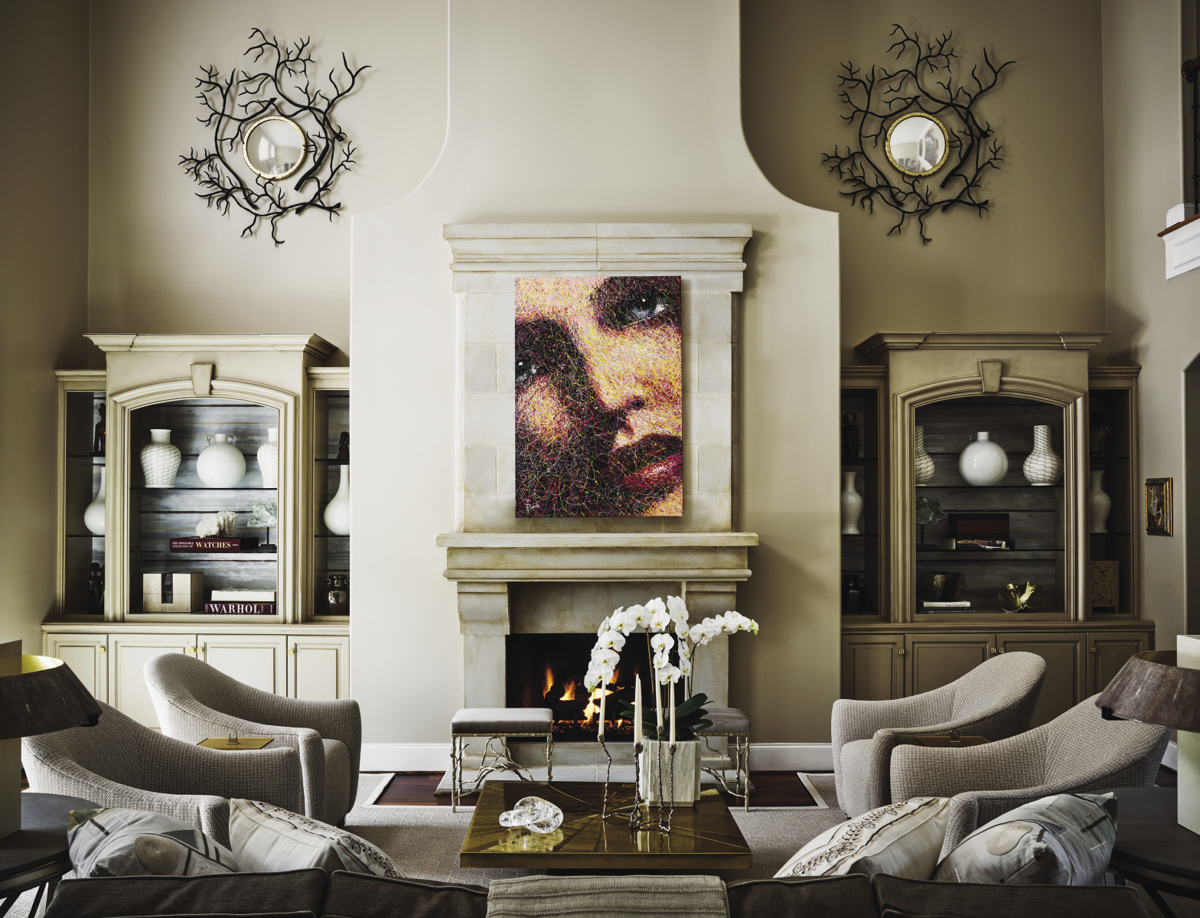 Kathy and Bob Olsen’s Tudor-inspired home on a quiet street in Green Hills could appropriately be dubbed the Art House. The moniker in this case doesn’t refer to film but rather another visual art: Bob’s extensive collection of paintings. After living in the home almost five years, the couple enlisted designer Jonathan Savage to reimagine the first floor of the 9,500-square-foot, six-bedroom house. There were two main considerations — Bob’s art  and the couple’s three Schnauzers.

“When [Kathy and Jonathan] were first starting this process, Jonathan was trying to scope out how we think about things,” says Bob. “Art is very important to me, so it was a nonstarter to just decorate the house and the art goes up in the attic. He was great about building around the artwork.”

In regard to the second consideration — the couple’s dogs — Jonathan chose a number of high-performance fabrics and indoor-outdoor carpets so the four-legged family members could have the run of the house.

Despite an underlying utilitarian aspect, the redesign is luxe, from the Maison Charles demilunes Jonathan and Kathy found while scouring a flea market in Paris to the Ferrell Mittman taupe chairs in the living room, the fabric reminiscent of a Chanel tweed suit with just the faintest silver metallic thread running through it. The chairs were found closer to home at another favorite shopping haunt, the Ainsworth-Noah showroom in Atlanta.

The home is mostly done in neutrals, with the artwork adding the only pops of color, save for the dining room. While they gave away much of their old furniture, deeming it uncomfortable or not to scale, the couple kept a rectangular cherry dining table. “This is the first piece of furniture Bob and I bought after we got married 30-something years ago,” says Kathy. “And we had these funky chairs that we loved. We had them in our lake house and lacquered them [navy] blue.” That color choice was inspired by two paintings in the dining room: a Charles Lassiter, one of Bob’s favorite artists, and a Picasso.

Some of Kathy’s silver, crystal and china collection, much of it handed down, is beautifully displayed in the dining room in a large china cabinet. There’s a tea service that belonged to her mother, Erté crystal champagne flutes and pieces of Limoges china.

The vintage pieces comfortably co-exist with the lacquered chairs. Jonathan, who grew up in Livingston, Tennessee, in a traditionally designed home, studied in London before finishing his education at O’More. After graduation, he worked in New York City and often utilized more contemporary elements, but after returning home and opening his own firm, he's found he is most comfortable in the middle.

In the entryway, two brass Baker lamps sit atop a creamy white parquet chest, which, like many of the special, unique pieces, Jonathan and Kathy found while shopping at the Paul Bert Serpette flea market. Jonathan calls the flea market “the soul of the project.” A colorful Joan Miró painting completes the picture. The entrance sets the scene for the striking redesign, with each room complementing the next. A stairway leads upstairs to six bedrooms, perfect for lots of visits from family, including the couple’s two grown sons.

Tear Down the Wall

When Jonathan took on the project, he suggested knocking down the wall between what is now the music room and the living room. Kathy, an accomplished pianist, had inherited a mahogany Steinway from her grandmother, which was in the living room. Now, it is front and center in the newly appointed music room, done in shades of gray and black, with its horsehair wall coverings and painted coffered ceiling. Two John Dickinson triangular stools are treasures Kathy and Jonathan found in Paris at the flea market.

There are two-story, 20-foot ceilings in the living room. Built-ins, which faux painter Daryl Garrison lightened up, were then lined with a wallpaper in tones of white, chocolatey taupe and brass. A colorful Andy Baird painting  — à la Jackson Pollock, just not abstract — hangs over the fireplace, except during football season, when it is replaced by a flat-screen TV. Flanking the sofa are two French modern Maison Jansen round accent tables from the 1940s or ’50s that Jonathan and Kathy spotted when leaving the Paris flea market.

While Kathy defers to Bob as the cook in the house — he even has an organic garden out back — they both agreed the kitchen needed a makeover. Kathy never liked the previous island, which jutted out to leave room for stools, or the round table next to it, which made the space cramped. Jonathan replaced the former with a white Cambria island, added a striking geometric glass chandelier and swapped the round table with a rectangular ebonized oak table and four upholstered dining chairs.

For the hearth room, off the kitchen, Jonathan chose an apartment-size sofa and small, comfortable velvet chairs. “This space is not a big space, and the furniture in here before was a little overpowering for the room," says Jonathan. “The goal was to make it where it’s a small intimate space that’s functional.” French doors lead to a pool with cabanas and a pool house, complete with a wine cellar. While that renovation was done earlier, Jonathan has seamlessly blended the redesign into the existing décor.

Having left the house on installation day, Kathy remembers she and Bob walking into their newly redesigned home. “It was like 9:30 at night, so they had the [dining room lights] dimmed and this room was just breathtaking,” says Kathy. “It was so gorgeous and so dramatic and sophisticated.” Phillip Jeffries parquet-patterned wood veneer wall covering adds interest, as does silver tea paper on the ceiling. “The goal was to add a reflective nature,” says Jonathan. As he aptly puts it, “I live for a detail.”

A Welcoming Dream Home in Elmington