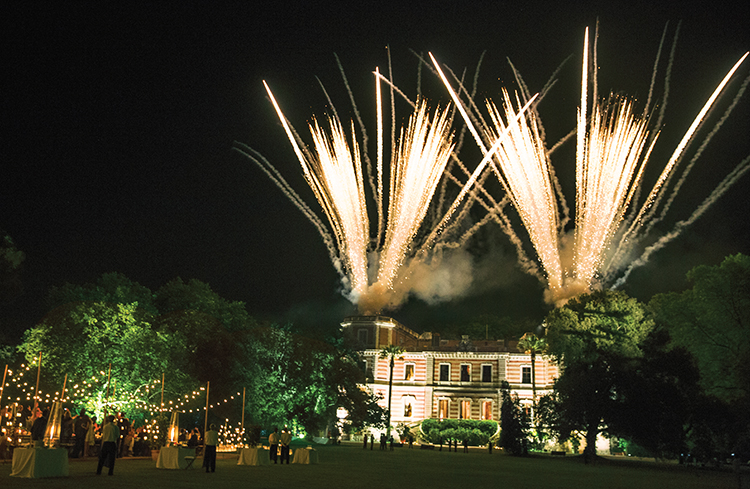 A leading global authority on hospitality, Bronson van Wyck has organized some of the most memorable and imaginative parties of the past two decades in locations all over the world. His firm Van Wyck & Van Wyck, founded with his mother, counts heads of state, rock stars and royalty among its clients. He’ll be discussing his new book, Born to Party, Forced to Work: 21st Century Hospitality, and sharing tips for hosts and hostesses as well as behind-the-scenes secrets at the entertaining lecture during the upcoming Antiques & Garden Show. We chatted with the world-renowned event planner about his new book, the best gift a guest can give and his favorite wedding moment.

Congratulations on your first book. What inspired you to write it?

This is our 20th year in business. ... This has sort of been percolating [because] I don't want events to ever get separated from hospitality. We are seeing this time where there's an unprecedented use of events to achieve business objectives, whether it's experiential marketing, customer relations or media-driven events. What's going on with a party is much more human than that, and I don't want that to get lost. I wanted to put down [my] thoughts about the principle of hospitality and what it is. … The rest [of the book] talks about how to do it. Not "this is what you should do" — because I wouldn't presume — but: “This is what other people have done. This is what we have done. This is what worked. This is what didn't work." Hopefully the examples and the motivations behind them, when they're explained, can inform someone else's decisions about how they might want to entertain.

I love the photos and the stories you tell. How did you select the parties to include?

You've produced so many parties. Where do you find inspiration?

I get inspiration every day. ... I like to see what's new. I love art. I love the old masters. I love antiques. I love design. I love gardens. I love hotel lobbies. I think they're such fascinating spaces that are full of anticipation [and] excitement. There's like an extra little bit of electricity in the air. I love history; a lot of things from history inspire me. With each of the chapters in the book, there's a historical kind of note — or perspective — to something that relates to what the chapter's about.

What elements make an event successful?

Well, great guests, number one. And when I say great guests, I don't mean the most beautiful, the most successful, the coolest, whatever, but you want people who can be present. They come, they talk, they engage. If there's a problem, they don't notice it, or they help become part of the solution. They don't come exactly on time; they come 15 minutes late, because that 15 minutes is the most priceless gift a guest can give a host.

Number two is a host or hostess who is present. And what that requires is preparation. It's just that simple. There's no substitute for preparing and anticipating so that you don't have to deal with things when you'd rather be with your guests — and when your guests would rather be with you. Nobody comes to a party to see their host behind the bar all night making cocktails.

There are very simple things you can do. Make a punch. Make it in advance. It's in a bowl. Your guests don't have to ask you for a drink; they can serve themselves. If you don't have help, and most of us don't, then serve things that you can serve at room temperature, that you can prepare in advance. Or order the food and put it on your nice china so that it feels great. That's what I mean when I say "prepare," so you can be present.

The other part of that is getting some emotional perspective on what you're doing, which is you're being kind, you're being gracious, and you're promising people when they come to your house that you're going to take care of them. You’re not promising them that you’re going to be perfect. You're just promising them that you're going to be you. So be yourself, and have a sense of humor about the whole thing. Because something is going to go wrong, because something always goes wrong. I have worked with some of the best hostesses on this planet, and something always goes wrong, even for them. The ones who are great laugh about it and move on. And so, that's really key.

Are there any new entertaining trends you're excited about?

Personalization and individual attention and treatment. Meaning doing sort of specific things for individual guests. Rather than place cards at a dinner party the other night, I just monogrammed their initials on the napkins, and each place setting had the napkin of the person who was going to sit there. People loved it. At another party, we printed photos of each of the guests on the backs of the menus. …

There's also this desire to share, to create content from events, and people want that Instagram moment. It depends on the kind of event it is. Some people want their wedding to be very private, and they don't want that kind of thing going on. That’s pretty easy to achieve because you can tell people. Others want it, and it's wonderful to create moments that are like mini sets or photographable visual stories. One thing that I've seen with weddings — mostly young people — they really like the social media aspect of it. …

What’s the difference between planning a wedding and planning other kinds of parties?

Oh my God, night and day. There's so many emotional factors that are in play with a wedding. The most important thing that [the bride and groom] need to realize is that a wedding is not a marriage. The important thing is the marriage and the future, the relationship, the family that you're going to build. That's a good perspective to start with, and to have empathy and respect for the fact that there are other people involved in a wedding. These are two families that are coming together.

What's a favorite moment from a wedding?

My mother tells this story: One of her roommates from college was marrying a Dutch guy. There are all these toasts at the wedding — the groom, the best man, her father. It wasn't traditional that the bride would get up and speak, but she took the microphone and gave the most beautiful, wonderful toast to her husband — in Dutch. She had gone for six months, without his knowledge, and learned his language. That is what I mean when I say, "You're planning a marriage." Don't ever lose sight of the fact that you're planning a marriage as you plan a wedding. She had done something that was the greatest gift she could have given to him. … She made him look like a rock star, she made herself look like a rock star, and she set them up for a future where they could have bilingual daughters, and to me, that was remarkable.

You live in New York and you grew up in Arkansas. What differentiates Southern entertaining from entertaining in other places you've lived?

I think Southerners are naturally more gracious. We have more time to think about how we're going to make other people feel. I think part of that comes from the South having been rural for longer. Entertaining at home stayed a primary means of entertaining. That culture of receiving people into your home remained vibrant and sort of vital. I think Southerners are also much more able to ensure that the moment is not troubled by [a mishap]. Part of entertaining is you want sincerity, but you need a game face when you just have been told that your soufflé has completely collapsed in the kitchen and you're trying to figure out the solution or alternative. If you show it, you're going to ruin the mood. Southerners don't ever show that kind of thing. I think that makes us really good hosts.

What are some things you always have on hand, or go to time and again, when you entertain at home?

I made a decision several years ago that I was going to have three looks for my table so I don't have to worry or think about it because there are a lot of other things to think about. I set them, took pictures and had the pictures blown up. I can set the table with a look that I have given a lot of thought. I can be on the phone ordering the ice, dealing with somebody's last minute change of plan, or giving somebody directions to get to my place, and I can still be setting the table, because I have it all figured out. If I happen to have anyone helping me, I can give [the picture] to them. … If somebody's planning to entertain a lot, take some of that stress out of it. Obviously [you] can do something different for a special occasion or you can add a layer, but [you’ve] got the base.

To learn more about the Antiques & Garden Show, visit antiquesandgardenshow.com.

On the Circuit: VIP Opening Party for Martina McBride: The Power of Her Voice Exhibit