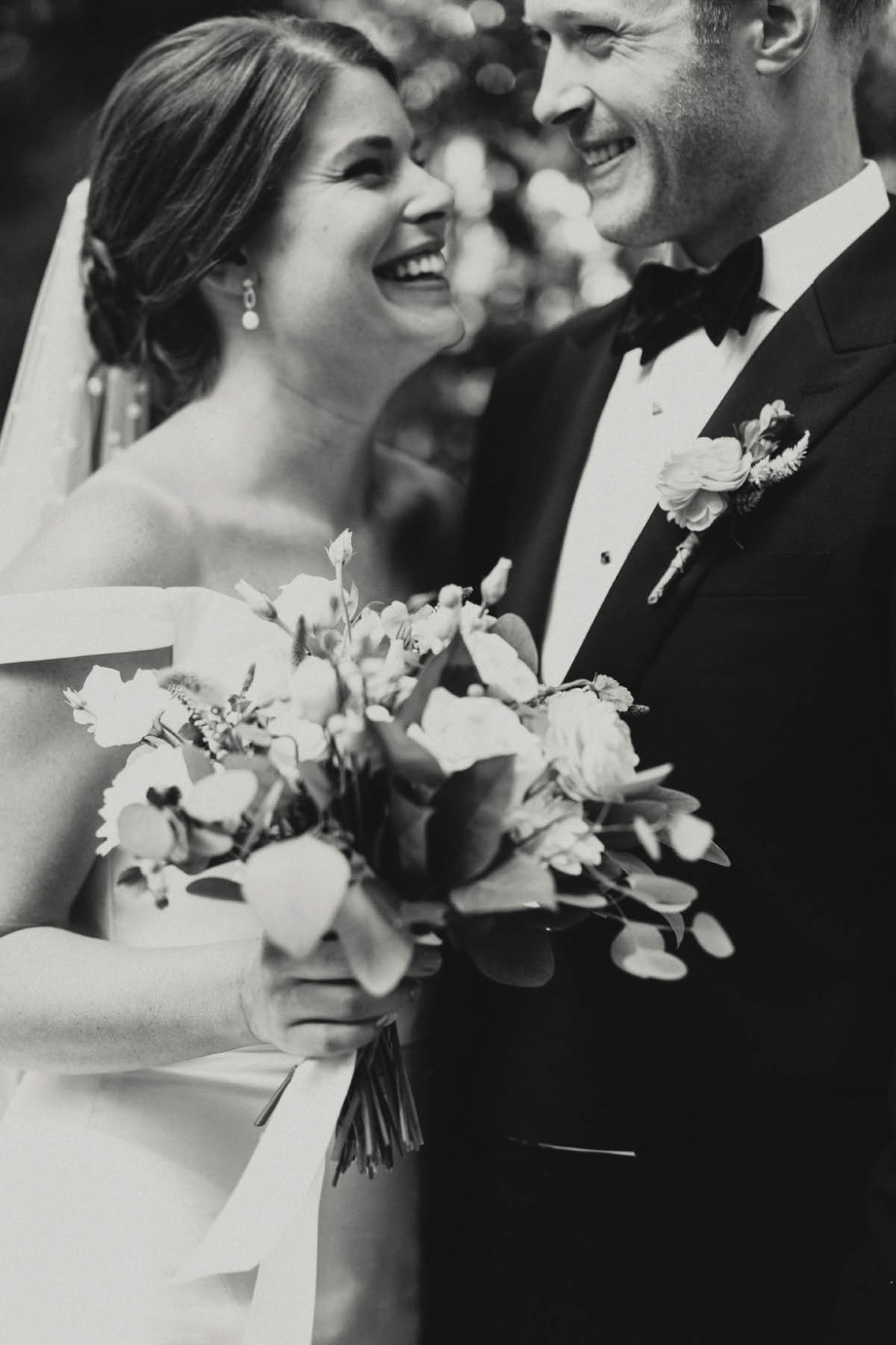 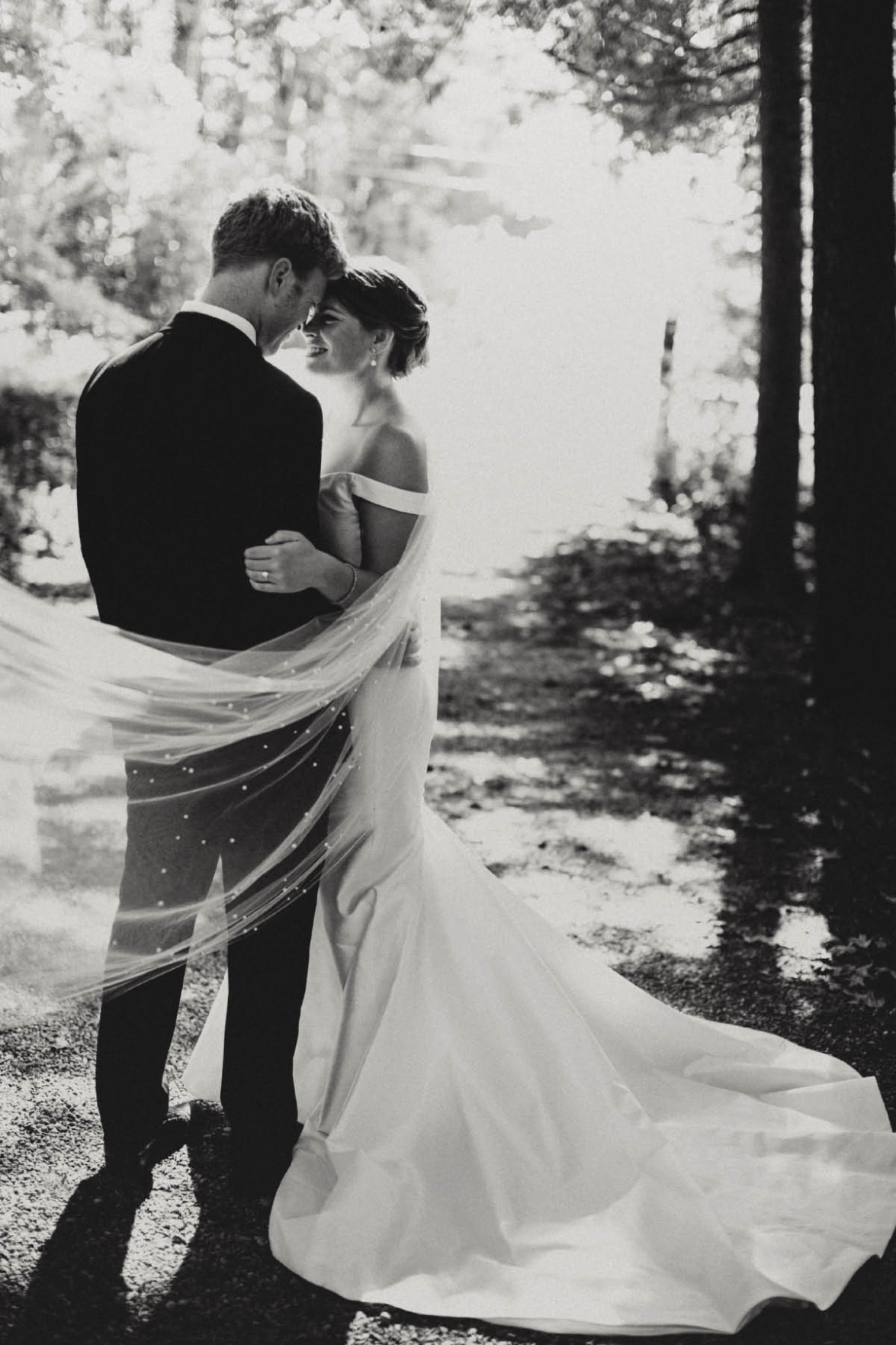 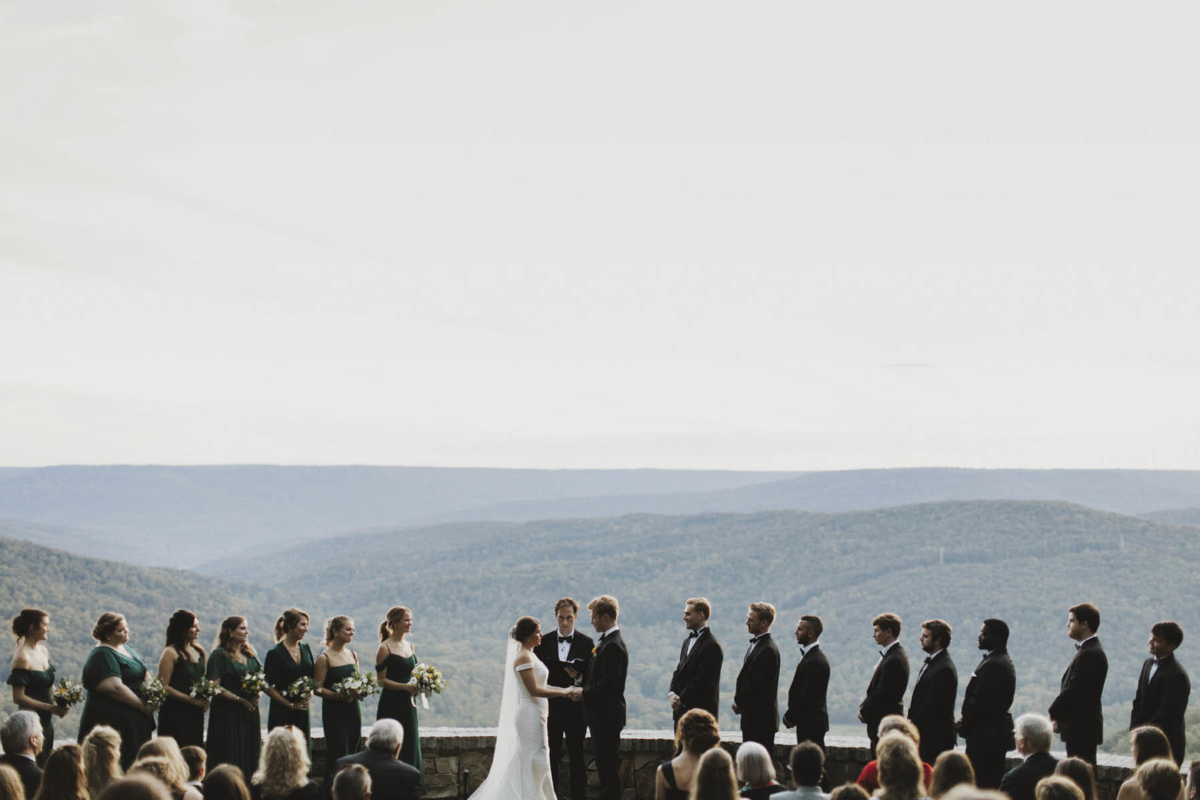 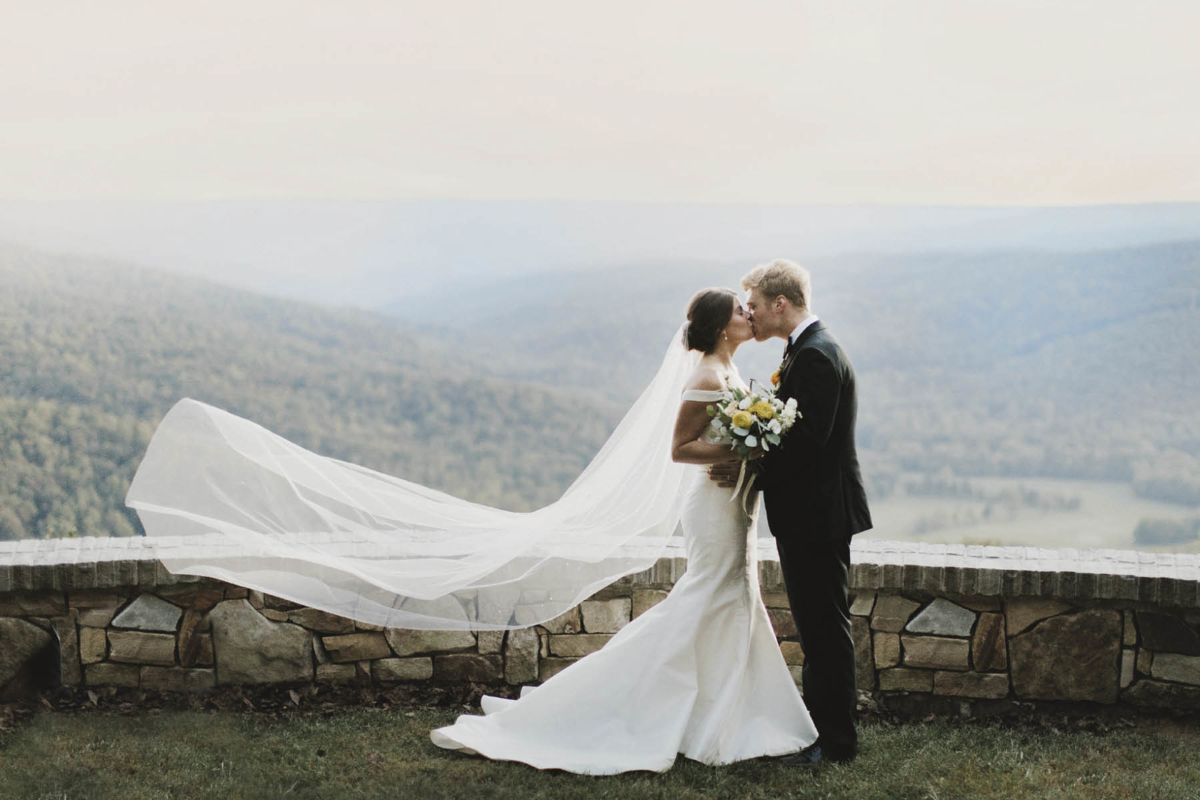 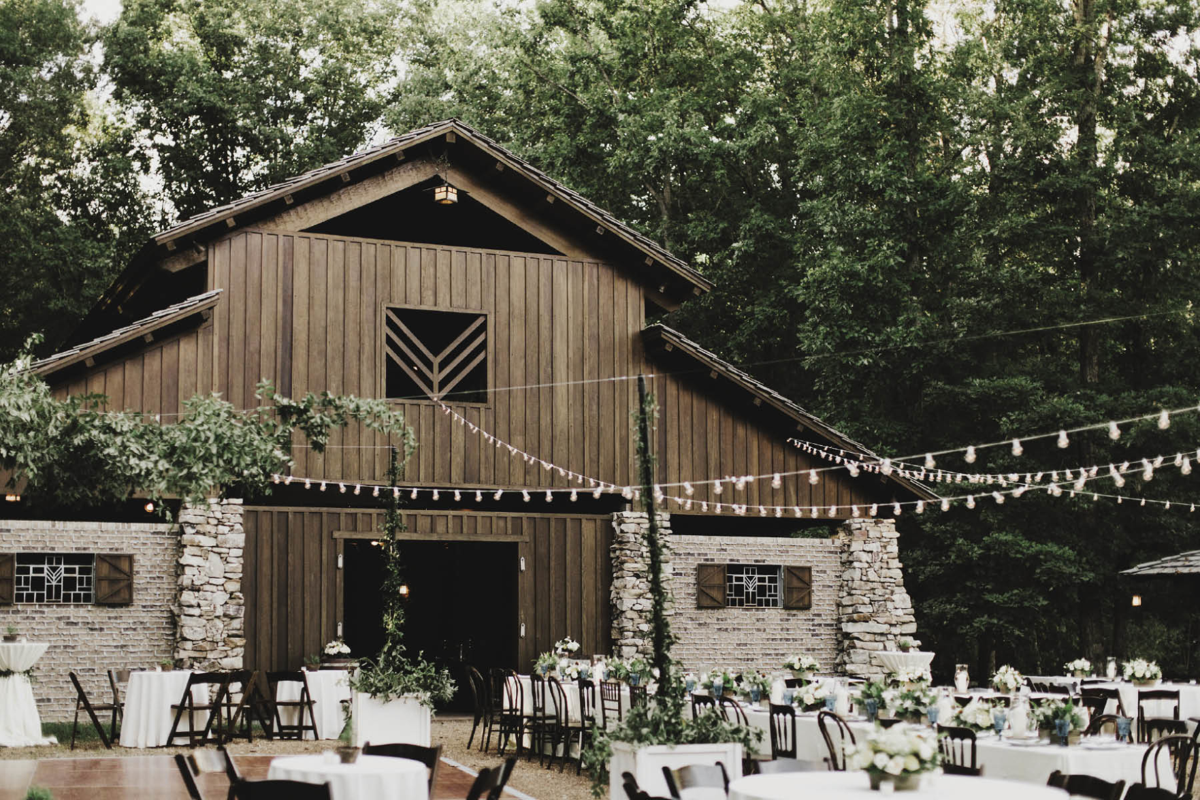 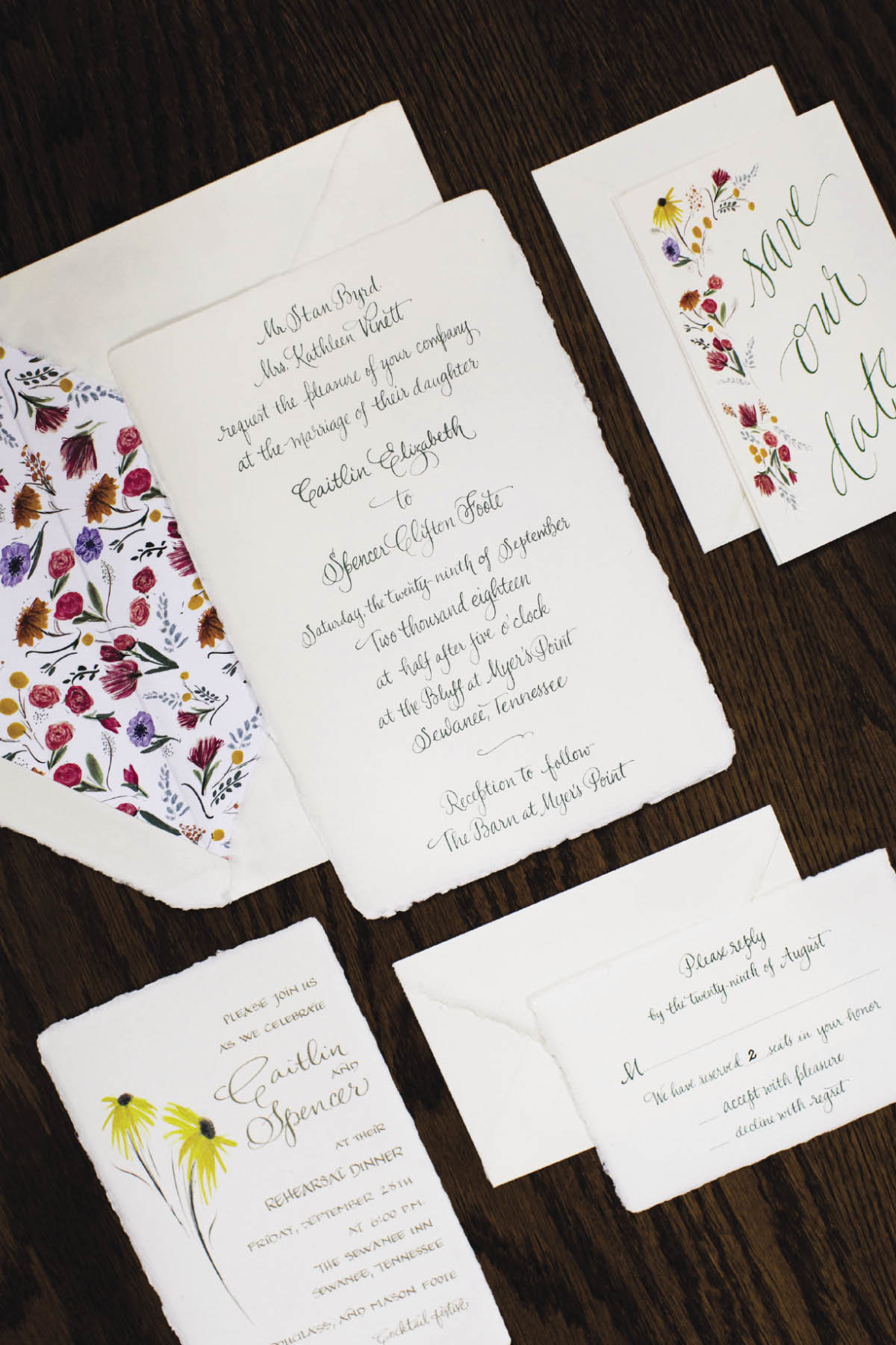 Caitlin Byrd and Spencer Foote, both Nashvillians, met as sophomores at The University of the South in Sewanee, Tennessee, in 2012. Spencer proposed on Oct. 6, 2017, on their fifth anniversary. "He took me on a ‘glamping’ trip," said Caitlin, "which was not very glamorous at all. He proposed by the lake at sunset, and then we went to a Tiki bar in a trailer park to celebrate."

They married Sept. 29, 2018, at the bluff at Myers Point in Sewanee. The groom's cousin Charles Nelson IV officiated, and Caitlin's good friend Austin Filingo played for the ceremony. The bride processed to "Here Comes the Sun," and then the couple recessed to "All You Need is Love."

"It was really special having Charlie and Austin participate," said Caitlin. "It was so personal — just the way we wanted it."

"The ceremony was delayed about an hour," continued the bride, “but we provided drinks at the bluff. It actually turned out great that it was later because the sun was setting, making an awesome backdrop."

The reception was outside at Myers Point’s barn, where decorations included flowers by Soulflowers in wooden boxes, herbs in terracotta pots and candles on terracotta plates. Place cards for the long head table pictured bird feet because the couple's friends call them "Byrdfeete." Jim 'N Nick's provided the barbecue, and Silver Spoon Catering in Decherd, Tennessee, designed the cake. Modern Vintage Events coordinated everything, and Val Cole did the invitations.

Once the band Entice stopped playing, everyone went inside the barn where the couple's friend Harrison Ballard deejayed for more dancing. The late-night snacks were Grangers from Sewanee.

After a wedding trip to Italy, the couple returned to Nashville, where she is the continuing care coordinator at Onsite Workshops and he is an agent trainee at William Morris Endeavor. Caitlin's parents are Kathleen Marie Vinett and Joe Stanley Byrd, and Spencer's are Lisa Bass Foote and the late Douglass Gordon Foote Jr.