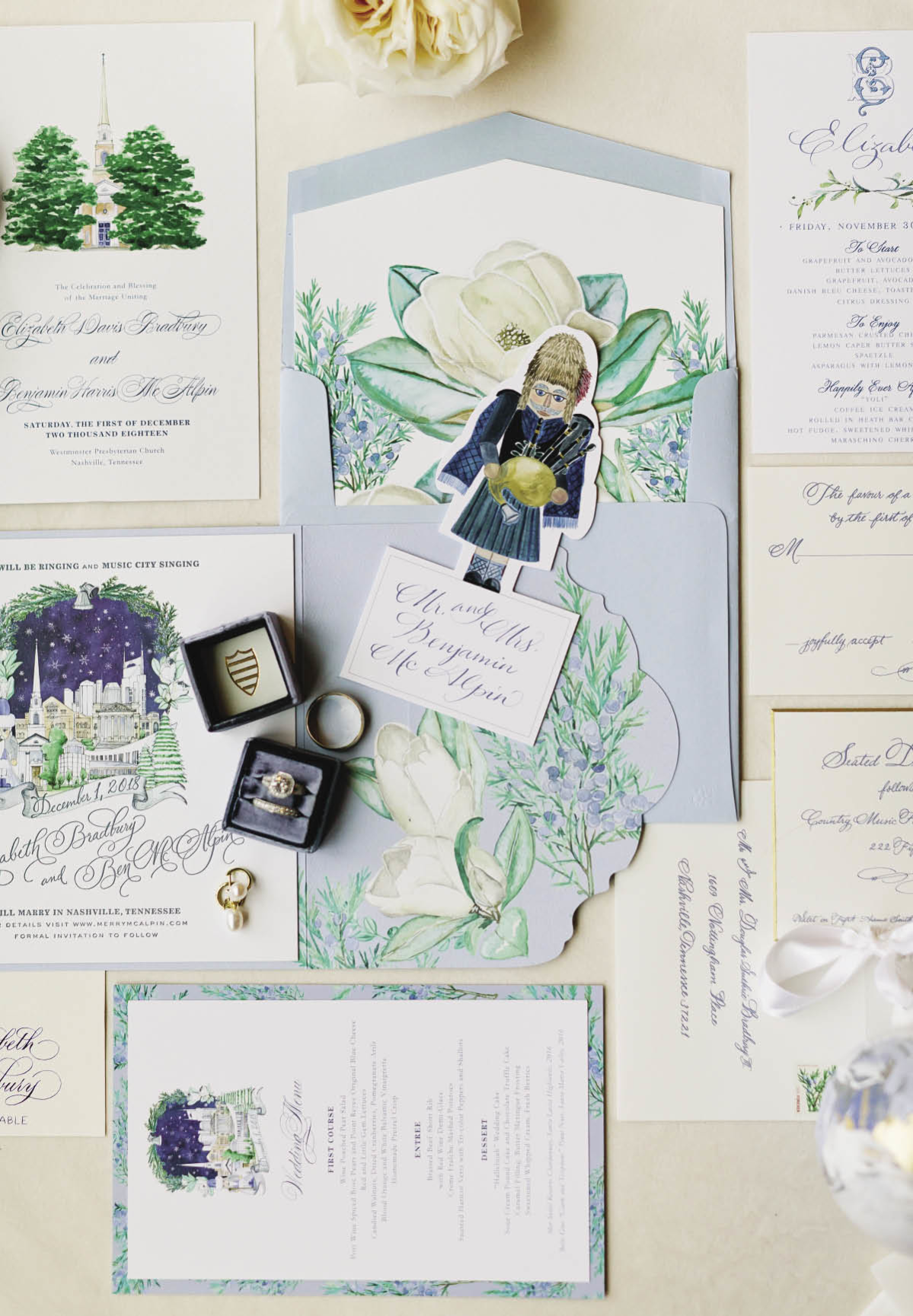 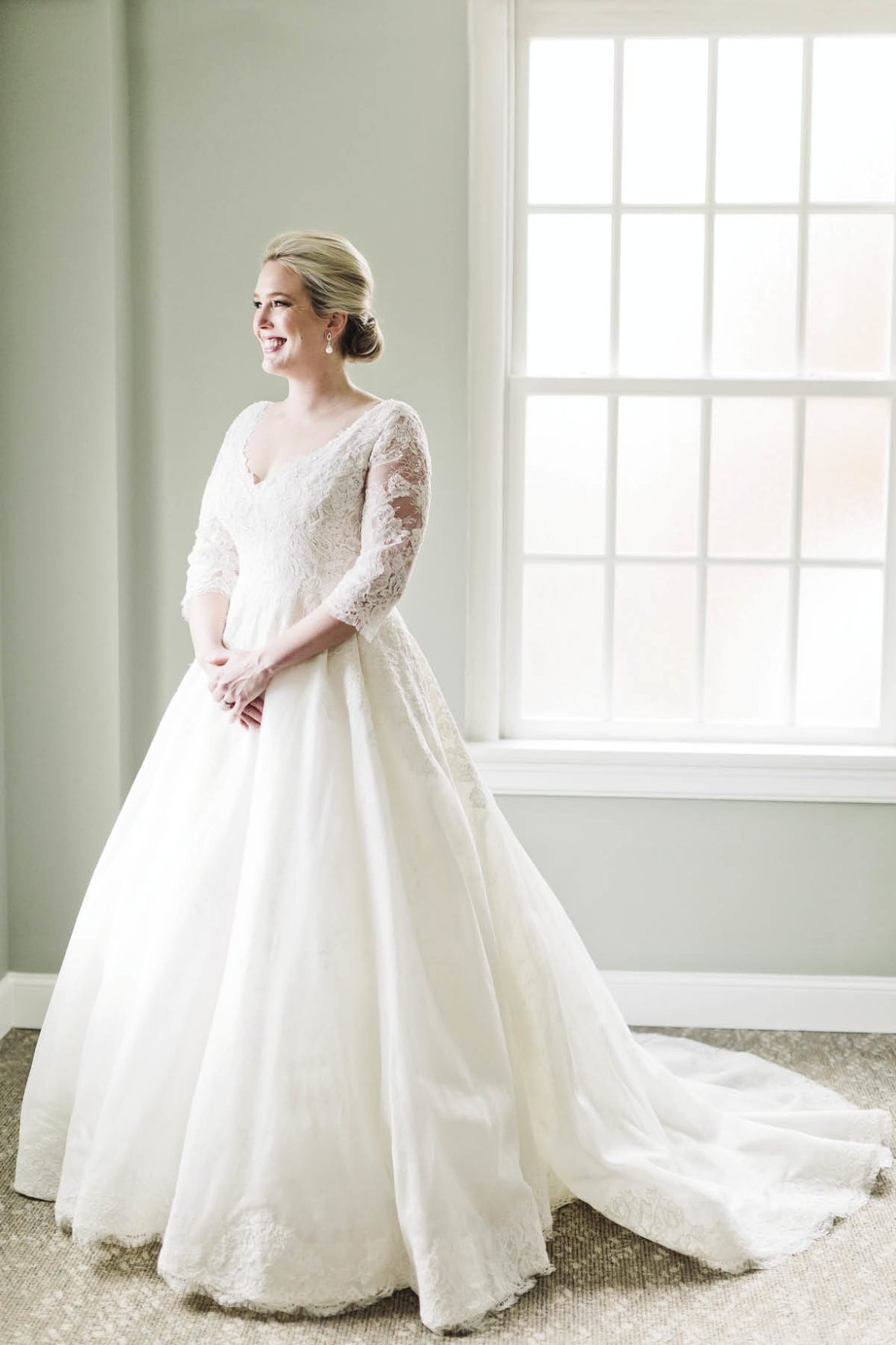 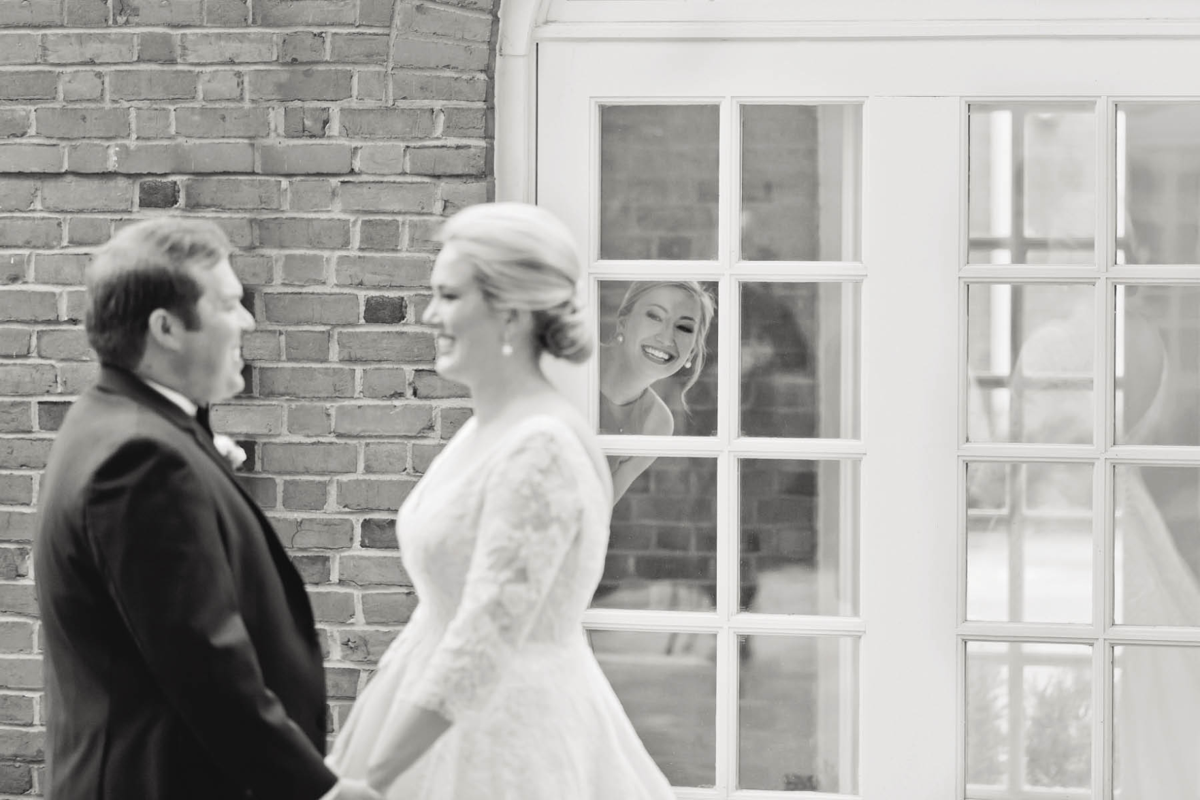 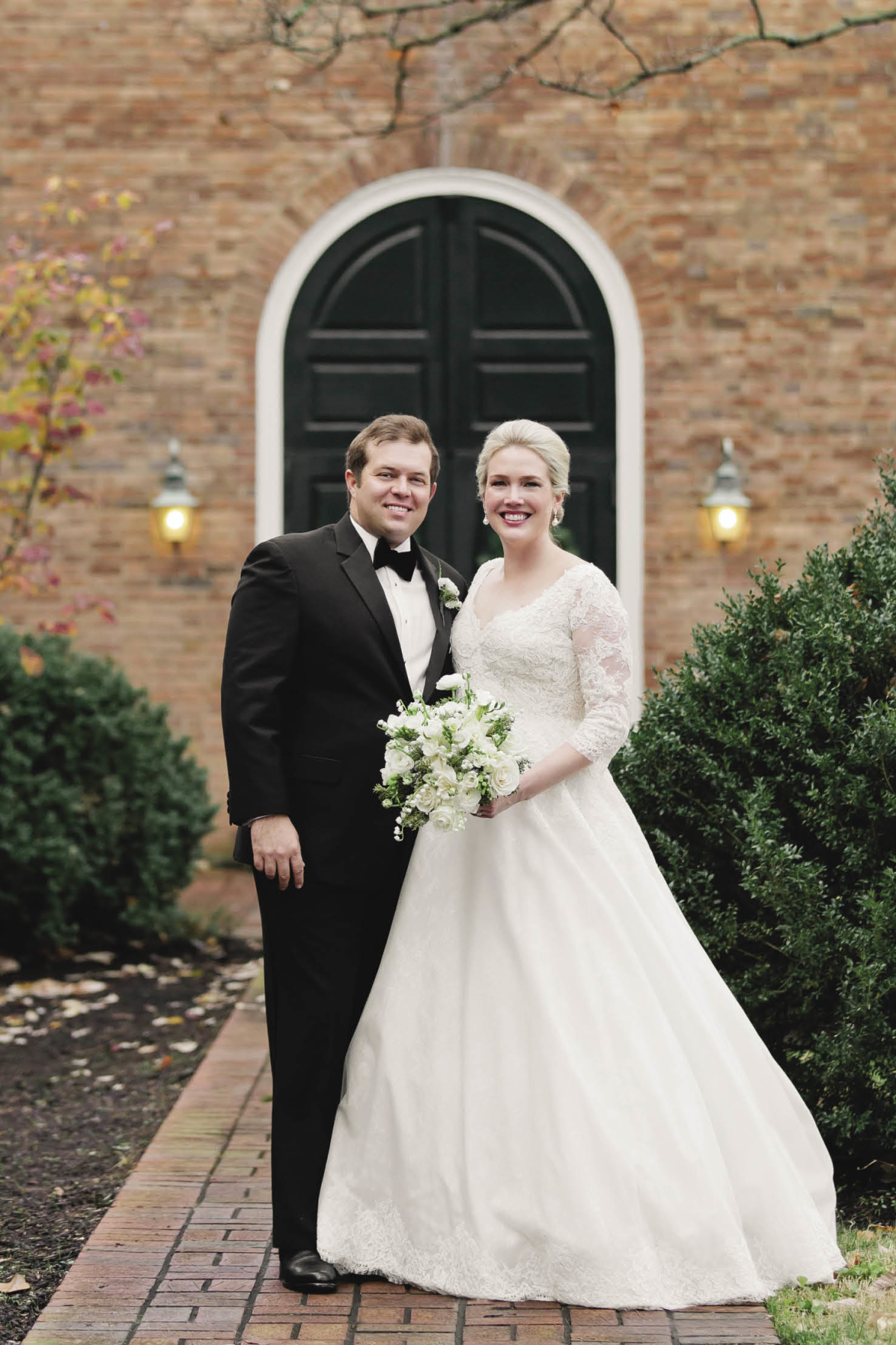 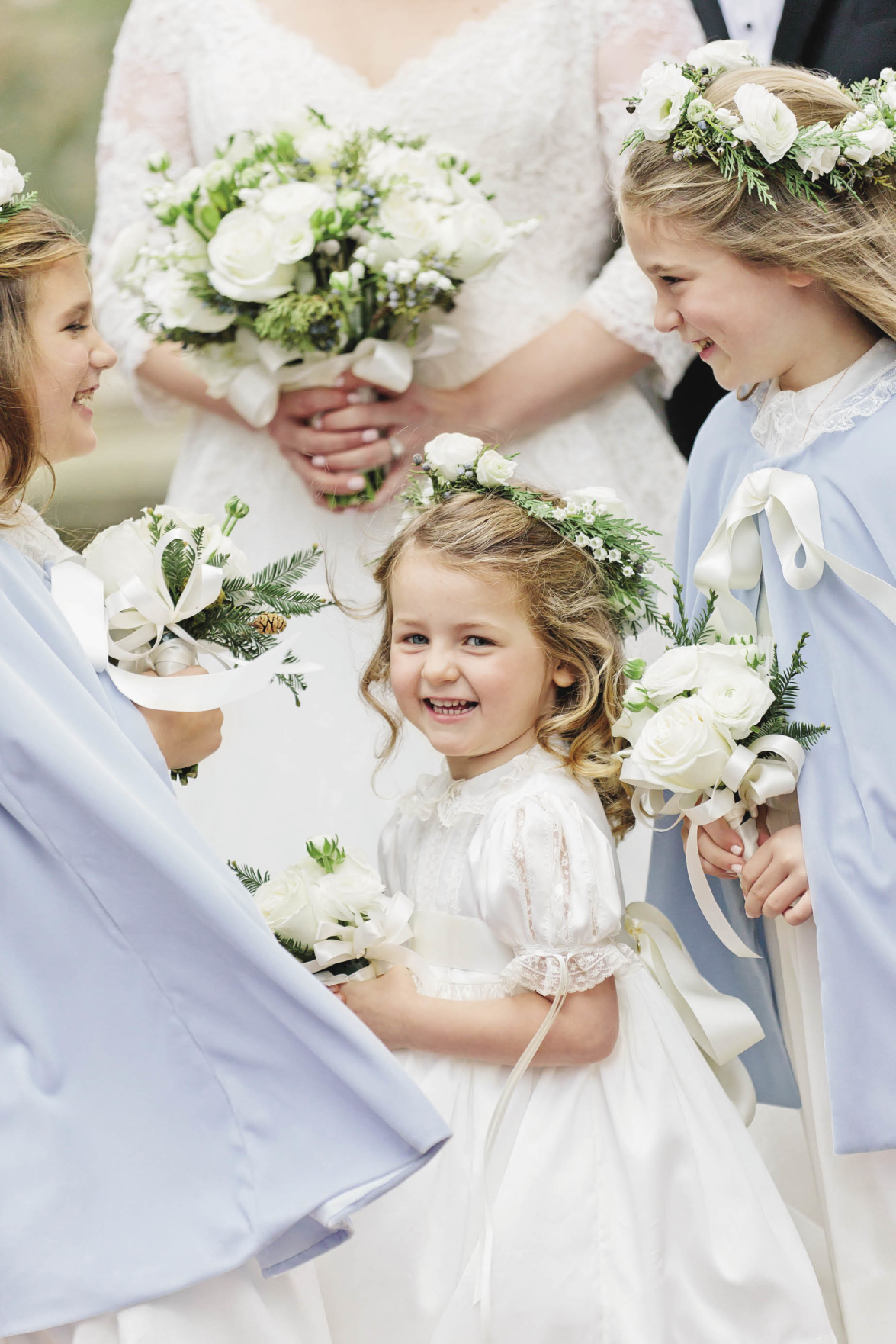 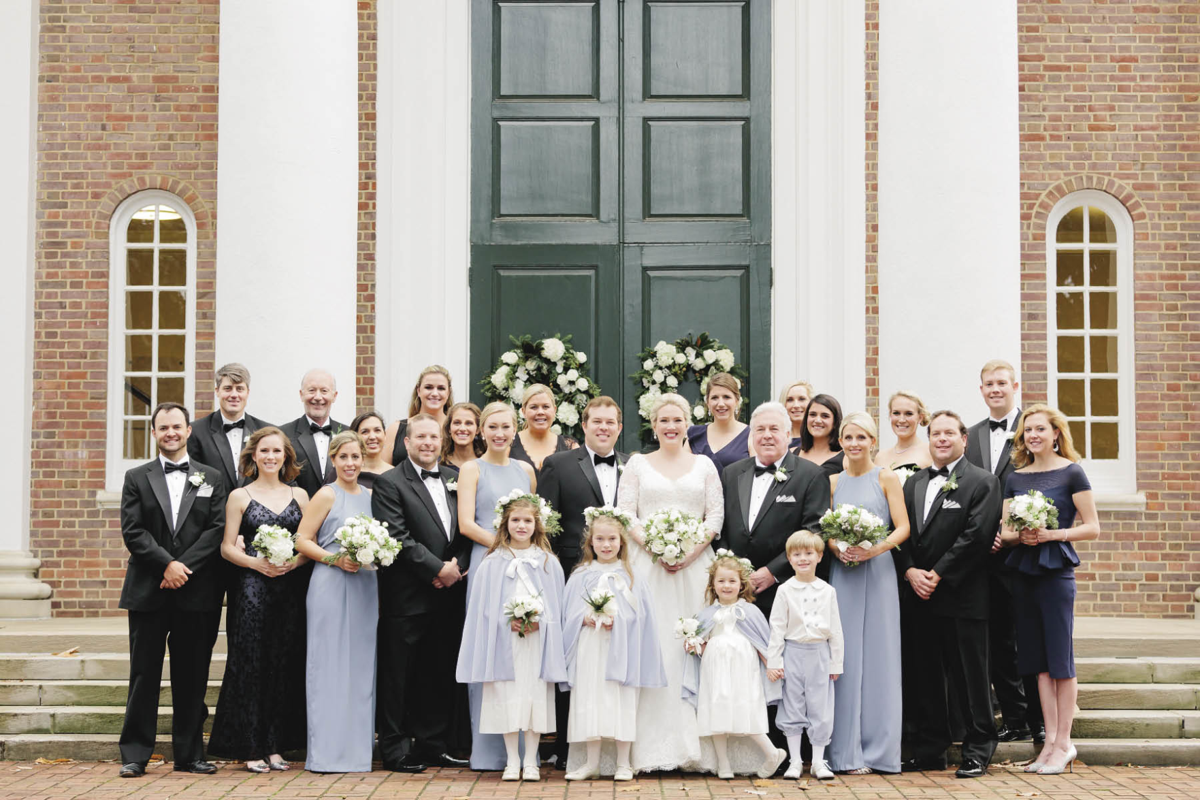 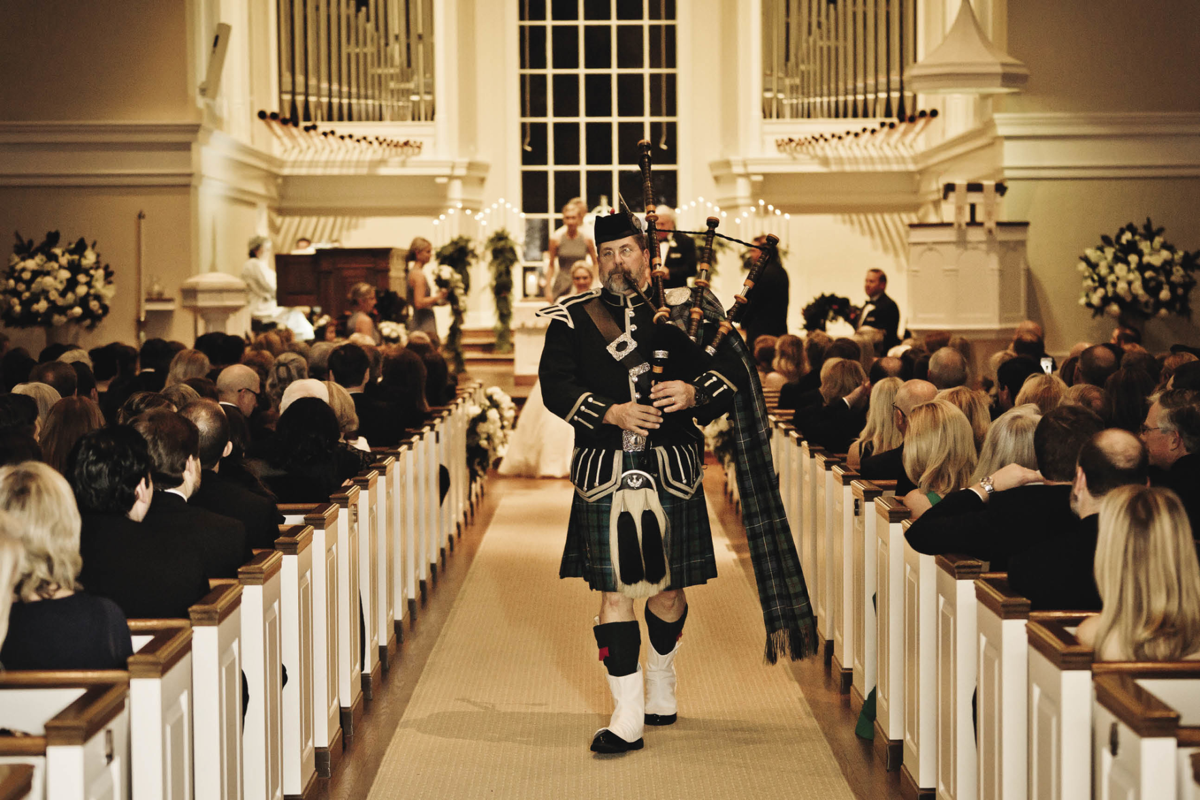 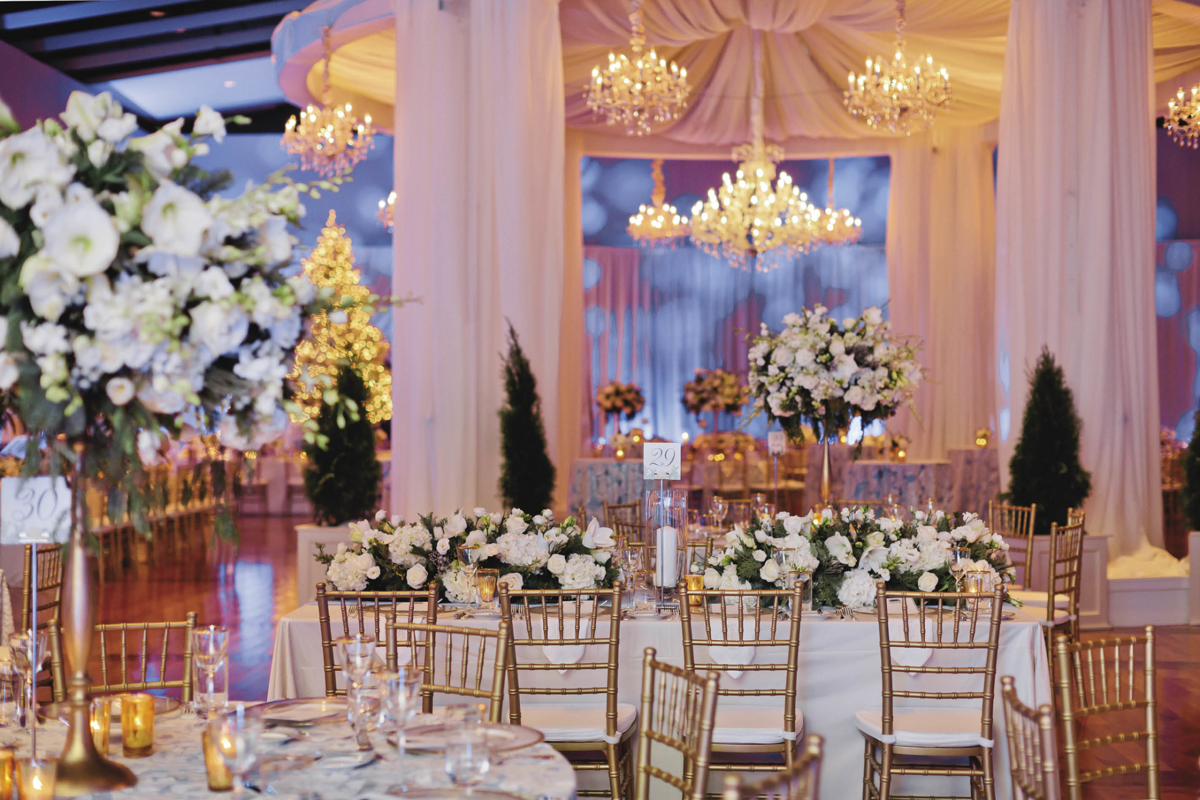 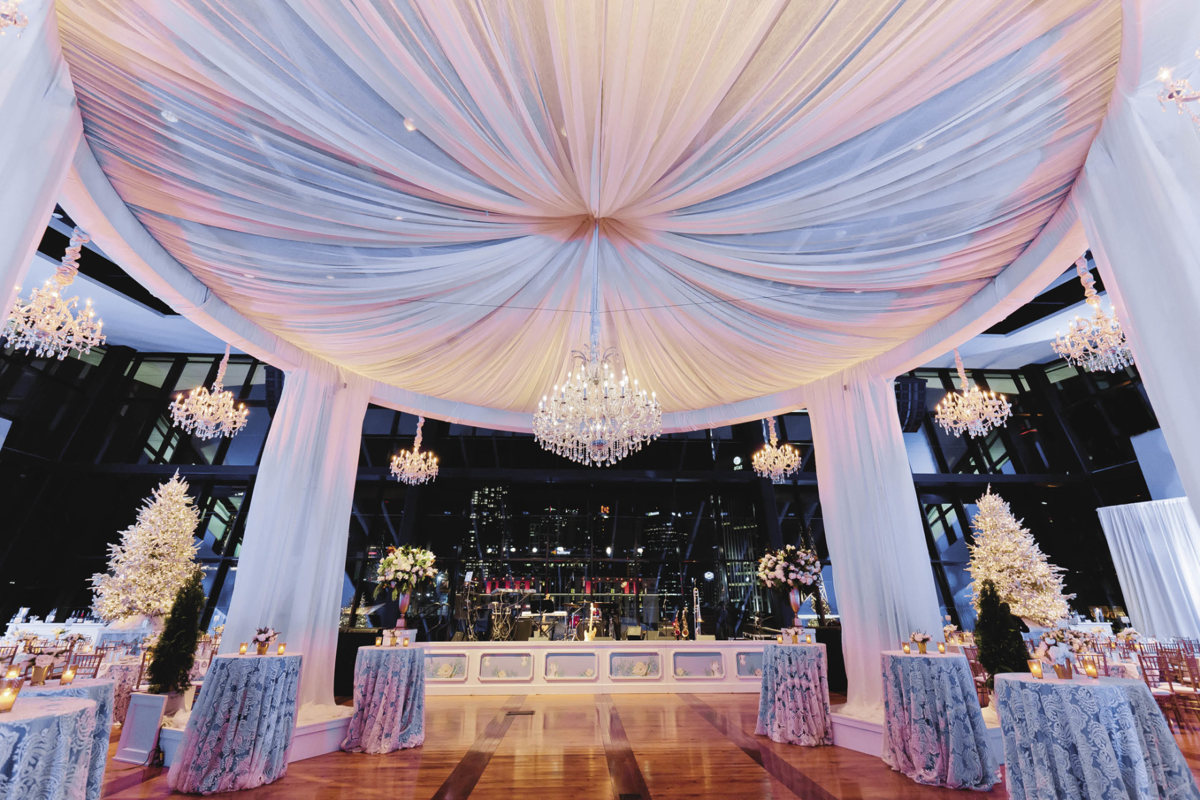 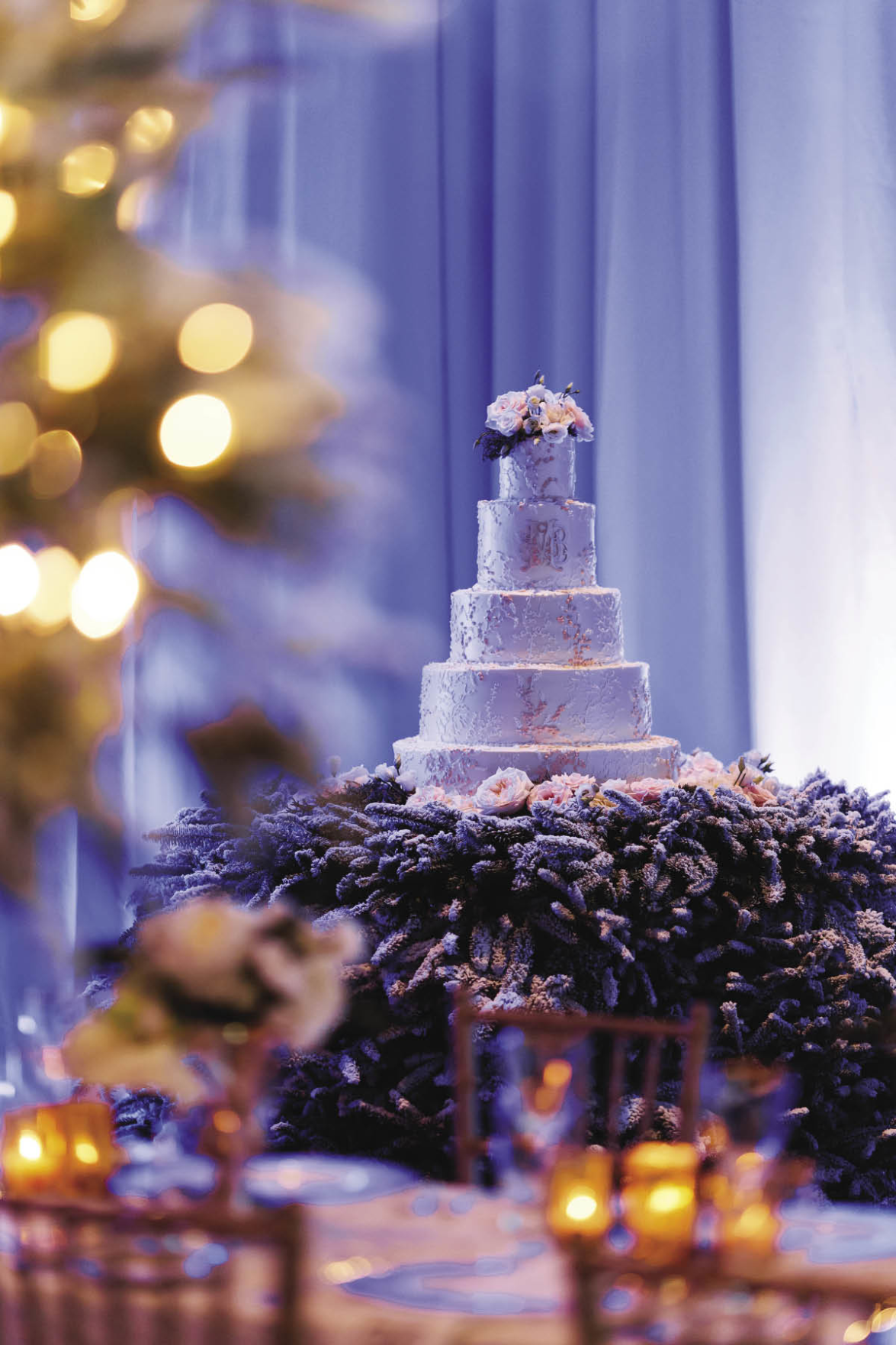 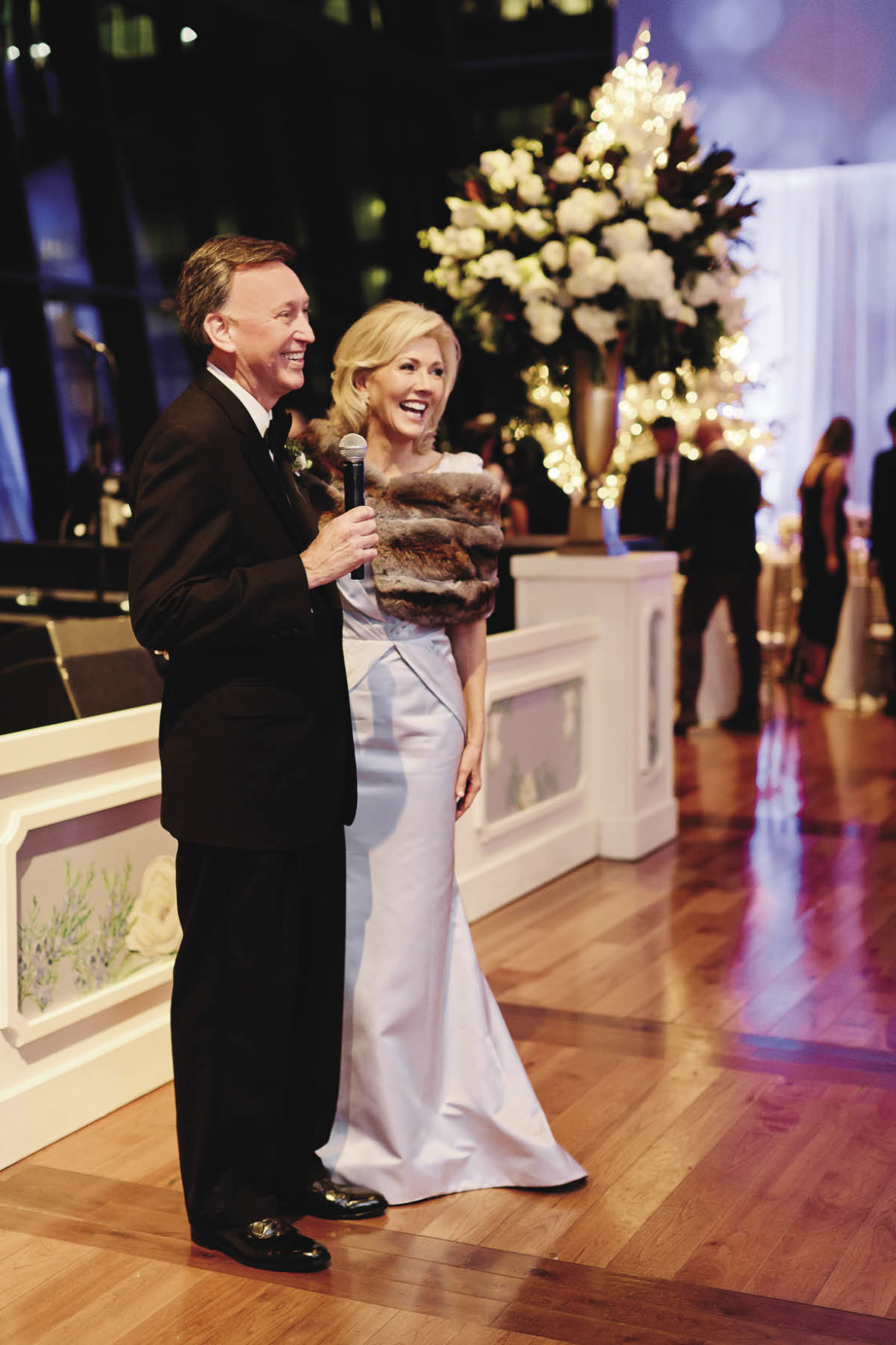 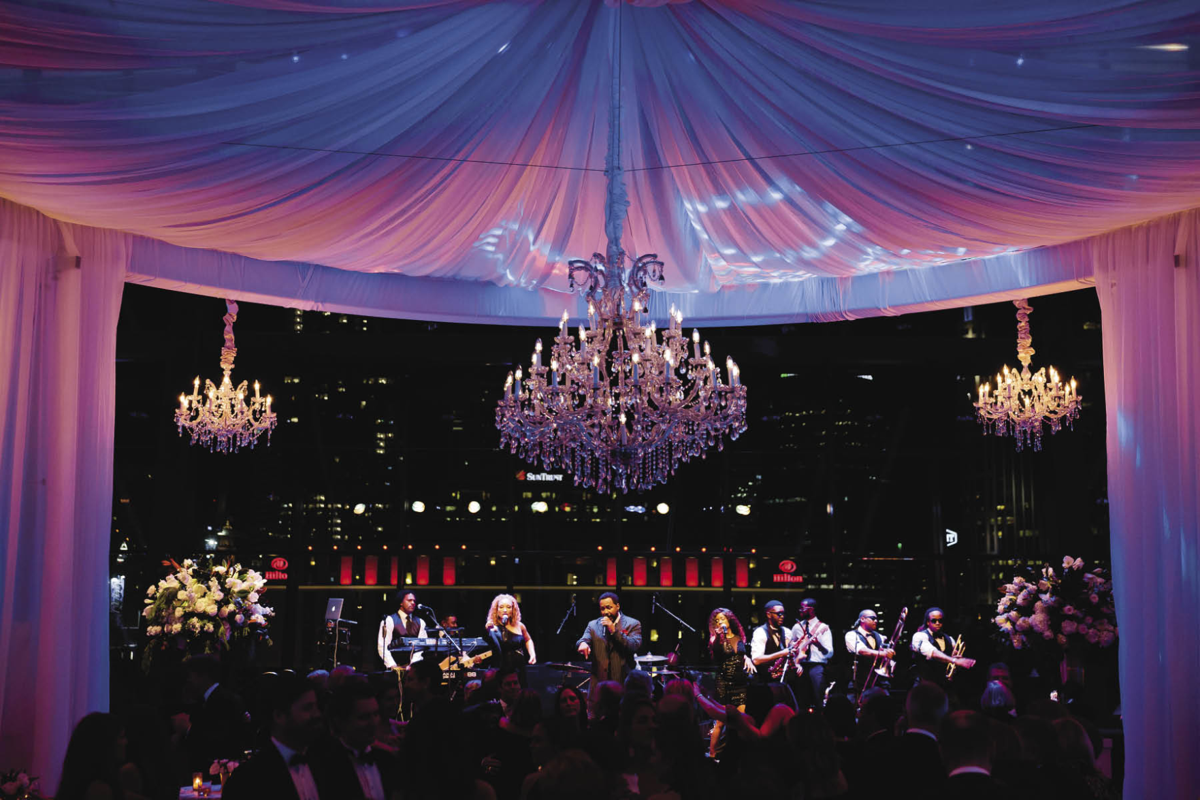 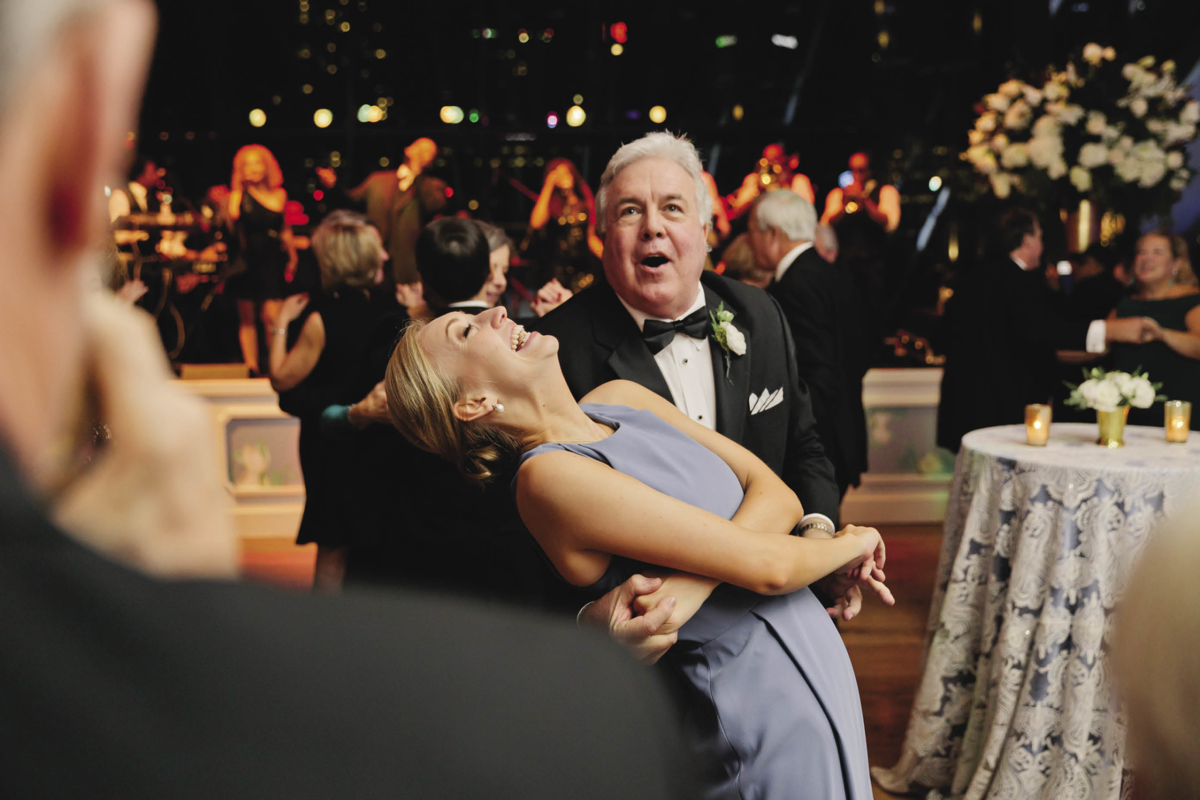 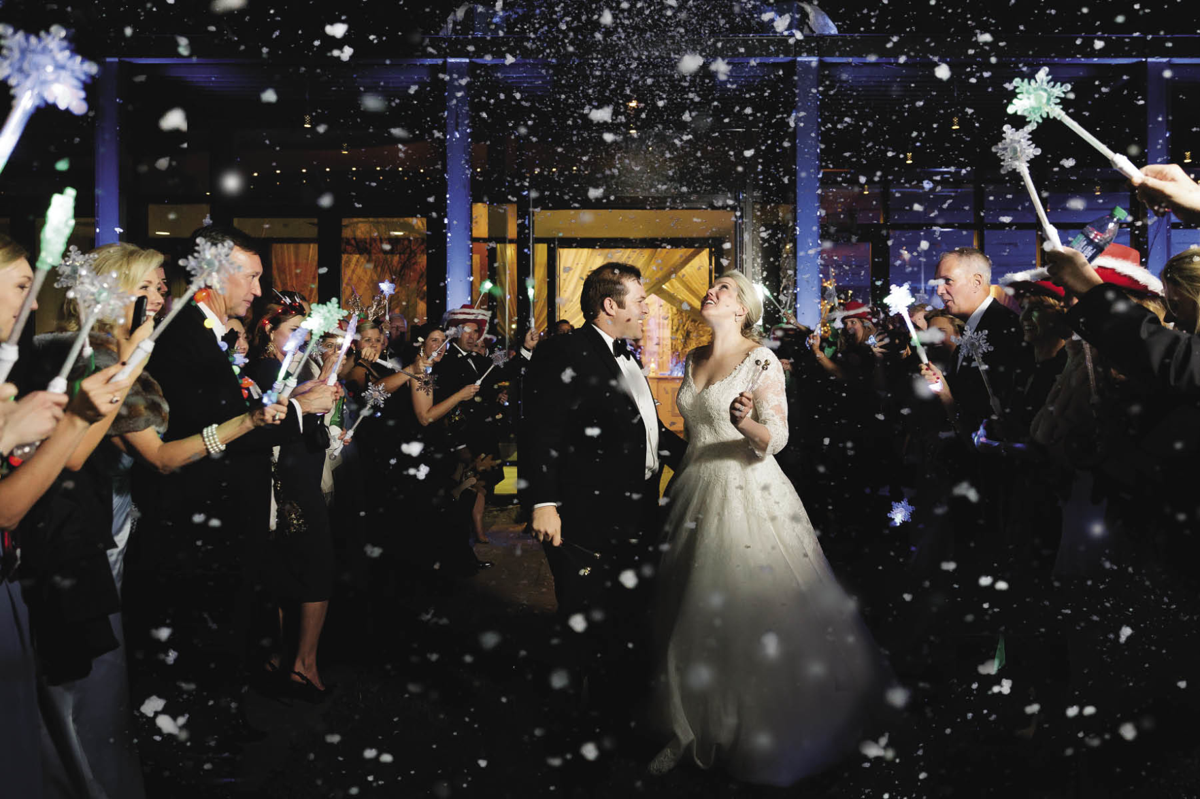 For Elizabeth Bradbury and Ben McAlpin’s early December nuptials, event planner Hugh Howser created a winter wonderland wedding that was as romantic as it was jaw-droppingly beautiful. Using a small swatch of velvet blue fabric from the bride’s mother, Sylvia, as a starting point, Hugh envisioned and executed a spectacular celebration of Nashville and the holiday season. “We used that fabric as the entire wedding's foundation — from printed materials, linens, attire and florals,” he says.

The day’s festivities began with a formal candlelight service at Westminster Presbyterian Church officiated by the Rev. Donovan Drake. Although the spotlight was on the bride and groom, Elizabeth says, “The two young ‘belles of joy,’ flower girl and ring bearer stole the show!” Arlene Gomez designed custom “royal wedding attire” for the four children, including hand-sewn French dresses in ivory silk batiste and antique lace topped with French blue velvet capes for the girls and an ivory silk batiste shirt and French blue velvet knickers for the ring bearer.

For the reception, Hugh and the H Three Events team transformed the Country Music Hall of Fame into a magical wintry dreamscape. Taking a cue from the bride’s extensive collection of Steinbach nutcrackers, the festivities included the beloved Christmas character on everything from the printed invitations to the custom die-cut escort cards to the reception décor. There were even two costumed nutcrackers greeting guests as they arrived at the party.

Snow-covered tables, flocked Christmas trees and winter greenery accented with juniper berries set the stage for the magical holiday affair with lush white floral arrangements from The Tulip Tree completing the winter wonderland aesthetic. The centerpiece of the hall was the 30-foot round arbor — draped in pleated ivory fabric and accented by six crystal chandeliers — that was designed by Hugh and built by Ken Warrington. Towering over the dance floor, the arbor provided the perfect place for guests to kick up their heels to the tunes of the Atlanta Allstars.

As the spectacular day came to a close, there was one more surprise in store for revelers. Despite the unseasonably warm December night, snow was falling on the Country Music Hall of Fame’s terrace as the couple made their exit. A nod to the citywide snow day back in February 2015 when Elizabeth and Ben first met, the farewell snowfall was the perfect send-off for the newly married couple.

Put It on Paper

The custom stationery and paper goods were designed and hand-painted by Tenn Hens. The wedding invitation and menu cards included a watercolor scene depicting several Nashville landmarks, juniper branches, snowfall and a nutcracker. The die-cut escort cards also featured nutcrackers that were hand-painted in watercolor and inspired by photos of the bride’s personal collection.

The five-tiered Hallelujah Cake from Dessert Designs by Leland was decorated in a delicate winter pattern and accented with the couple’s monogram and white roses. As impressive as the cake was, the cake table was equally noteworthy. Event designer Hugh Howser chopped a snow-covered Christmas tree in half — “I scared everyone to death” — and capped it with a mirrored table topper.

Although French blue was a prominent accent hue throughout the wedding, the day was a sensational vision in white, specifically the gorgeous florals from The Tulip Tree. The bridal and bridesmaids’ bouquets and the reception centerpieces were assembled using all white flowers, including orchids, O’Hara and Playa Blanca roses, stephanotis, lilies of the valley, lisianthuses and freesias. Reception arrangements were accented with juniper branches, cedar, pine and mini pine cones to add a bit of holiday flair.